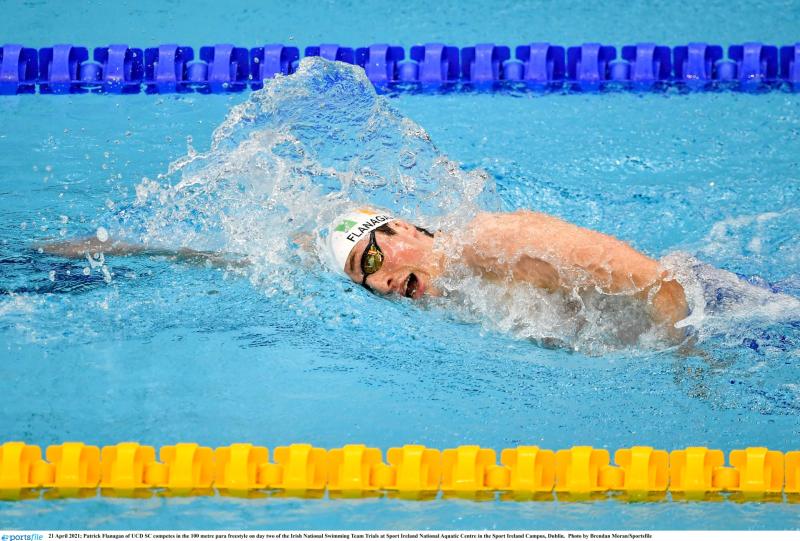 Three Longford swimmers - Darragh Greene, Gerry Quinn and Patrick Flanagan - will have the Tokyo Olympics and Paralympics firmly on their minds as they compete in Budapest and Madeira over the coming days.

Darragh Greene– National Centre (Dublin), who will be on the plane to Japan later this summer, and Gerry Quinn– National Centre (Limerick) are part of the Swim Ireland team of 24 athletes competing at the LEN European Aquatics Championships in Budapest, Hungary, at the Duna Arena (May 10-23).

The focus for the swimming contingent will be on Tokyo 2021 relay qualification - this will be an attempt to qualify an Irish relay to the Games for the first time since 1972.

Ireland’s most recent Irish Senior Record-holder Finn McGeever will be making his debut appearance at a European Championships, as will Longford's Gerry Quinn, Naomi Trait, Erin Riordan and Max McCusker.

Swim Ireland’s National Performance Director Jon Rudd said: “For our swimmers, this event has an explicit relay focus as far as we are concerned, and the athletes are aware that this is the absolute priority for these Championships.

"There is nothing more honourable in our sport than representing your nation in a relay event and this team have been selected with one purpose in mind - that of Olympic relay qualification.

"The team is littered with high quality athletes, and we will be doing all we can to see at least one Irish relay team feature at an Olympic Games for the first time in 49 years.

"For our divers, it's off a plane from Tokyo and onto a plane to Budapest in the quest for much needed international competition leading into the summer, something that we have all missed so much in the last 14 months.

"Across swimming and diving, it is a large team, and it has been selected with a clear intent and purpose."

Meanwhile, Patrick Flanagan is part of he Irish team that will compete at the World Para Swimming European Open Championships. The five-person team will compete from 16-22 May at the Penteada Olympic Pool Complex in Funchal, Madeira.

This event will serve as a key opportunity for some athletes to hit Minimum Qualification Standard times (MQS) for Tokyo 2020, while others, who have already achieved this, will use it as an opportunity for some much-needed competitive swimming prior to the Paralympic Games.

Róisín Ní Ríain will make her debut appearance in a major competition for Team Ireland. The 16-year-old Limerick swimmer impressed a fortnight ago at the Irish National Team Trials in Abbotstown, reaching the MQS time for the Paralympic Games in several disciplines.

Roisin will be joined by World Championship Bronze and European silver medallist, Nicole Turner along with Patrick Flanagan, who will have his sights set on medalling and hitting the MQS time for Tokyo.

The five-person team will also include Jonathan McGrath and Sean O’Riordan, both of whom put in a number of impressive performances at the recent Irish National Team Trials and will look to hit MQS times in their events.

The World Para Swimming European Open Championships will serve as one of the last opportunities for Tokyo 2020 hopefuls to compete at a major competition before the Tokyo 2020 Paralympic Games. It will also be the first major competition for some since the London 2019 World Para Swimming Championships. Importantly, it will be another opportunity for athletes to adapt to the necessary Covid-19 countermeasures that will be implemented throughout the event and at the Tokyo 2020 Paralympic Games.