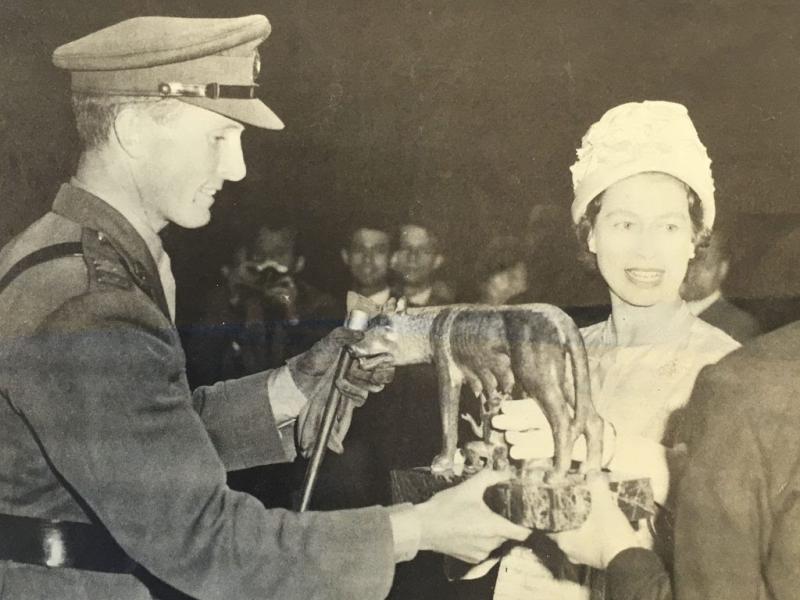 May 3 1961: Queen Elizabeth II presents the Romulus & Remus trophy to Captain Billy Ringrose on winning the Grand Prix at the Piazza di Siena, Rome with Loch an Easpaig

One of Ireland’s most successful Show Jumping riders of the 50’s and 60’s, and Chef d’Equipe of the famous Aga Khan team the year they completed three victories in-a-row in 1979, Col Billy Ringrose has died in Dublin at the age of 89.

Later Ringrose became Commanding Officer of the Army Equitation School at the McKee Barracks in Dublin and Chef d’Equipe of the Irish team.

Following victory for the Irish team of Paul Darragh, James Kernan, Eddie Macken and Captain Con Power in 1977 when managed by Sean Daly, Billy Ringrose took over as Chef d’Equipe in 1978 and helped complete their famous three-in-a-row of Aga Khan victories in 1979.

Along with winning the Aga Khan trophy as a rider and as Chef d’Equipe of the Irish team, Ringrose later presented the trophy to the winning Irish team Chef d’Equipe in his role as President of the RDS.

He is also the only rider to have won the Grand Prix event at all four shows on the American tour; Washington DC, Harrisburg Pennsylvania, Madison Square Garden in New York and the Toronto Winter Fair.

Horse Sport Ireland CEO Ronan Murphy commented: “On behalf of everyone at Horse Sport Ireland, I want to pass on our deepest condolences to the family and friends of Col Billy Ringrose, who was one of the greats of Irish Show Jumping. His career as a rider and later as Chef d’Equipe was outstanding and he gained the respect of everyone he met not just for his sporting excellence but as a true gentleman.”

In 2017, Ringrose’s son Fergal published a 280-page memoir of his father’s life and equestrian career, ‘Billy Ringrose – A memoir of my Father’  including nearly 80 images taking the reader back in time to his days as a rider on the international circuit. Ringrose’s Dublin Nations Cup successes came on the very same RDS turf that his grand nephew Garry Ringrose has now become a major star with Leinster Rugby. The book is self-published by the author is available online at www.billyringrose.ie.

Over the course of over a year Fergal Ringrose sat down with his parents and recorded a series of conversations about his father’s career. He also spoke to other equestrians – Ned Campion, Dermot Forde, Sneezy Foster, John Ledingham, Brian MacSweeney and Des Ringrose – to help complete the story of one of the greats of Irish show jumping: his father, Colonel Billy Ringrose.

Ar dheis Dé go raibh a anam - May he rest in peace.