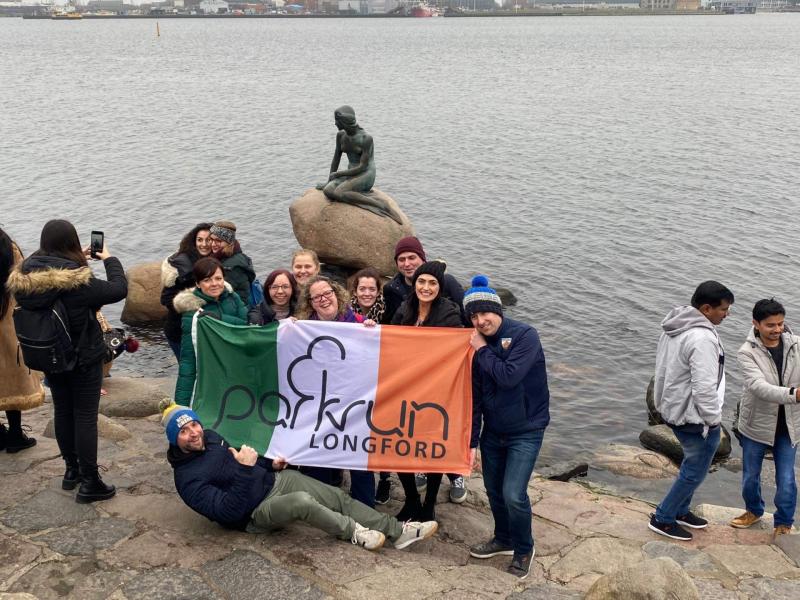 Twenty-five Longford parkrunners travelled to Copenhagen on Friday, January 24, especially to participate in the parkrun in the Danish capital.

The group consisted of Longford parkrunners from parts of Leitrim, Cavan and of course Longford.

“This is the second time Longford parkrunners have travelled as a group together and it was an incredible experience”, remarked Kevin Kane.

In January 2019, a group of 35 Longfordians travelled to Bushy parkrun in London, which is where the first ever parkrun took place.

Kevin explained, “A few months ago, I put a poll up on Facebook to see where people would like to go and do a parkrun outside of Ireland. Copenhagen was the resounding winner.  As soon as I put up the details, many people began contacting me saying they’d booked. I was delighted with the response.”

The parkrunners mainly flew on the same flight, which Kevin explained added to the social element of the holiday. “It was fantastic having so many on the same flight. We had great craic in the airport. We all know each other from parkrun, but spending the weekend together meant we got to know each other much better. It just goes to show that parkrun is much more than just a 5km run. It’s a superb community event where people become friends also.

“The run itself took place in Faelledparken just outside the city centre. It’s situated right outside Denmark’s national football stadium.

“It’s a picturesque park which is lovely and flat. 135 parkrunners took part on the day and we weren’t the only Irish people taking part. There was a lad from Mayo and another lad from Dublin in addition to us”, Kevin pointed out.

The Longford parkrunners received a warm welcome. “They couldn’t have been more welcoming to us. They were so friendly and said they’d visit us in Longford in the near future,” added Kevin.

It wasn’t all about running mind. The group travelled around the city after the run, seeing everything Copenhagen had to offer. “We went on a canal trip, visited many museums, saw Tivoli Gardens, visited the Guinness World Record Museum and the Ripley’s Believe it or Not Museum. We also saw the Little Mermaid.”

Kevin also remarked there will be more parkrun trips in the future. “I am going to organise at least two each year. Who knows where our next ones will be, but Munich, Amsterdam and Milan will be ones to consider I reckon.”

Longford parkrun is a free 5km run or walk, which takes place every Saturday throughout the year in the Mall at 09.30am. Register and join the fun on www.parkrun.ie.