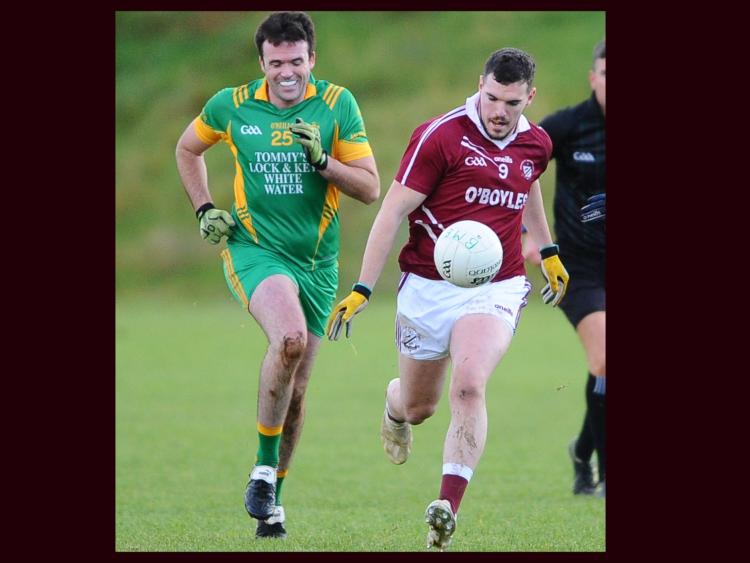 Ballymore Eustace’s reward for their comprehensive twenty-one point victory is a semi-final encounter with Clann na nGael on November 23. The Meath side were 3-8 to 1-9 quarter-final winners over Ballynacargy (Westmeath).

The second semi-final will be between Rathgarogue-Cushinstown (Wexford) and Shannonbridge (Offaly), who were 0-11 to 0-6 winners over Craobh Chiaráin (Dublin) and 2-13 to 1-8 winners over Roche Emmets (Louth) in their respective quarter-finals.

The Kildare standard bearers, managed by Paul Breen, had first use of the strong wind and they certainly made it count, establishing a 0-14 to 0-2 cushion by the interval.

For Enda McGann’s Kenagh to have any chance, they needed a promising start to the concluding half. Unfortunately for the Longford junior kingpins, it failed to materialise.

Free scoring Ballymore Eustace grabbed the opening scores of the second half through Tadhg Grace and Brian Crowe and just before Rory Connor nailed Kenagh’s third point of the contest in the 35th minute, Ballymore Eustace had a goal disallowed as Stephen Dwyer was correctly adjudged to have been inside the small square before the ball arrived.

The goal was coming though and it finally arrived in the 47th minute after Kenagh carelessly spurned possession just inside their own half and Niall O’Neill, a first half replacement for the injured Garreth Clarke, cooly slotted the ball to the bottom corner of the net, 1-17 to 0-4.

Another sub, Aaron Deegan, got in on the scoring act with a point for Ballymore Eustace and in the 54th minute Keith Fennell’s perfectly flighted delivery saw Stephen Dwyer rise highest and fist the ball to the net, 2-18 to 0-4.