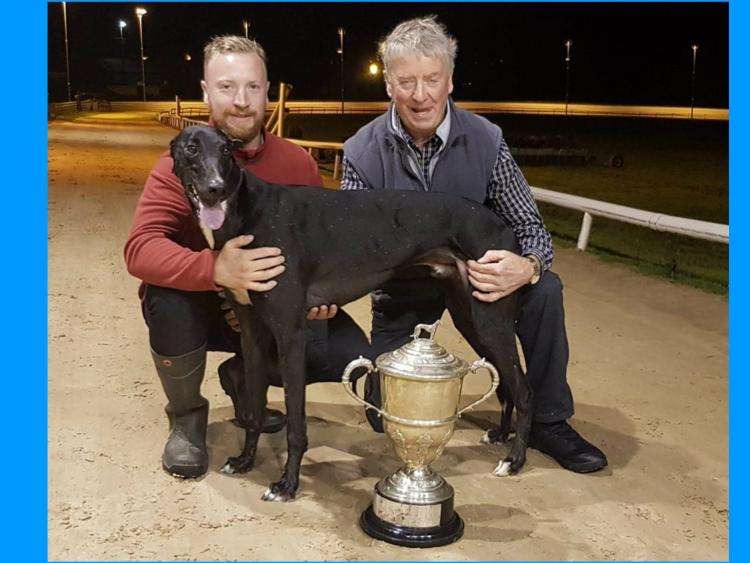 Zaconey Hulk sprinted to glory and clinched the €5,000 prize money for the Foley family after he won the Liam Clancy & Harry Ryan Memorial Derby Final (Grade : A3) Flat 550 at Longford Greyhound Stadium on Friday night.

In a thrilling final, which may yet prove to be the final derby at the stadium, raging 4/6 favourite Lemon Patsy, owned by the Brave Eight Syndicate and trained by Gerry Holian, set the early pace and looked a winner down the back straight.

However, Niall Foley’s 5/1 outsider Zaconey Hulk refused to concede and he stormed up the Longford straight and got up to win by half a length in 30.01. Teresa Maguire’s Quare Limit finished third behind Lemon Patsy.

Commemorating Liam Clancy and Harry Ryan, friends and family of both men were on hand to present the derby trophy to to Niall and Eric Foley.

Save Longford Greyhound Stadium
Meanwhile, there will be a meeting in the Longford Arms Hotel at 7pm on Monday, August 26 to discuss the future of the track.

Also read: Save Longford greyhound stadium fundraiser has raised over €19,000 to date

Last week, Longford Track Supporters Club revealed that in excess of €19,000 had been raised as part of the drive to keep the stadium open.