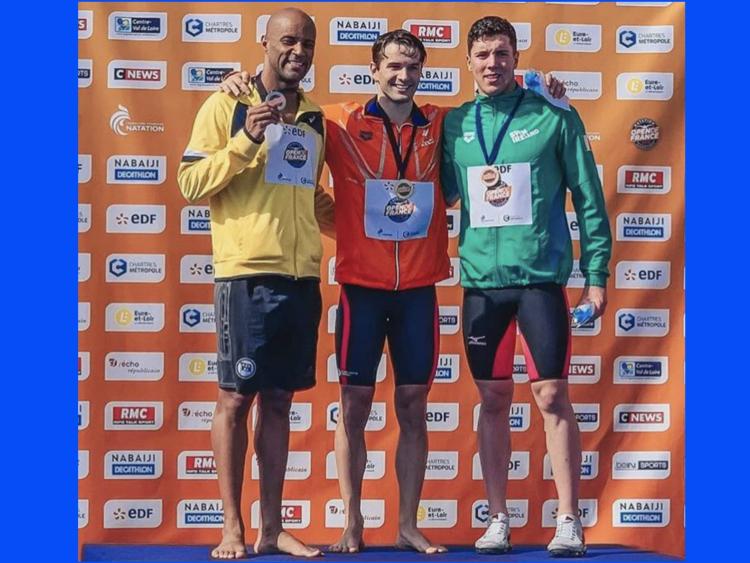 Longford swimming star Darragh Greene, who is hoping to gain qualification for the Tokyo 2020 Olympic Games, picked up a bronze medal at the 13th annual French Open Swimming Championships yesterday.

The first Irish swimmer to swim the 100m breaststroke in under a minute - achieved at the 2018 European Swimming Championships in Glasgow - Darragh finished third behind swimmers from the Netherlands and Brazil in the L’Odyssée Aquatic Complex, Chartres on Tuesday.

Swimming out of National Centre Dublin and coached by Ben Higson and Steven Beckerleg, Darragh is part of a team of 13 Swim Ireland athletes, made up of 3 divers and 10 swimmers, that will compete at the FINA World Championships in Gwangju, South Korea, from July 21-28.

Not only will they compete for world success, but the event will provide the thirteen with their first opportunity to qualify for the Tokyo 2020 Olympic Games.

In an interview with THE42.ie at the launch of Tesco Ireland's sporting title partnership with Swim Ireland recently, Darragh commented, “At this World Championships it’s kind of cool to think that if you can muster a lifetime best, you could be going to the Games.”

First day of the French Open done and dusted and picked up in the 100m. Onto the final day tomorrow to finish of the Irish summer tour before Worlds #opendefrance2019 @swimireland @TescoIrl pic.twitter.com/rEQZXQ4cYt