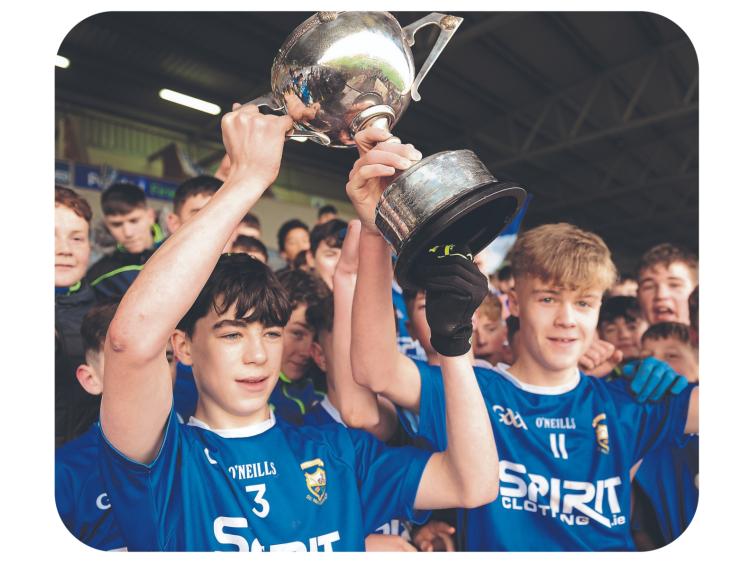 St Mel’s, who were in front by four points at the break, were hanging on to a slender 0-9 to 1-5 lead in the exciting closing stages and after their keeper Zac McKeon made a vital save to stop a Good Counsel goal attempt the advantage was extended when Colm Coyle converted a free in the 58th minute.

The killer blow was struck moments later when Patrick Moran got through to score a well-taken goal after receiving the perfect pass from Ronan Courtney and another point quickly followed from Matthew Flynn.

Set up by Moran, substitute Harry Mulvihill fired home a cracking goal in the fifth minute of stoppage time to leave the worthy winners St Mel’s nine points clear in the end as the jubilant Longford college were crowned the Leinster U-14 ‘A’ champions for the first time since 1998.

Playing with a lot of intensity St Mel’s enjoyed the better of the exchanges in the first half and were full value for their 0-6 to 0-2 lead at the break.

Patrick Moran opening the scoring in the 3rd minute and further points followed from Matthew Flynn (a great strike) and Colm Coyle as Ciaran Garvey’s highly charged side led by 0-3 to 0-2 with 20 minutes gone on the clock.

St Mel’s then created a very good chance of a goal but Moran (a constant threat in the full-forward-line) suffered the misfortune of slipping right in front of the posts when about to shoot.

That was really putting it up to Good Counsel and while they closed the gap with a point from a Kyle Rankin free in the early stages of the second half, back came the very talented St Mel’s team with a brace of scores in quick succession from Matthew Flynn (free) and Colm Coyle to lead by 0-8 to 0-3. (Flynn's father Enda captained St Mel's to Leinster U-14 and senior glory back in the past).

After the New Ross outfit wasted a glorious goal opportunity in the 37th minute when Eoin Whelan blasted the ball wide from close range, the same player found the back of the net in the 41st minute to make it very interesting indeed.
A number of harsh decisions made by the Laois referee Pat Moran were going against St Mel’s and his general handling of the game left a lot to be desired.

When Good Counsel got back on level terms with two points from frees converted by Kyle Rankin in the space of a minute midway through the second half the Wexford college looked on course to capture the Leinster U-14 ‘A’ title for the second year in succession.

But St Mel’s showed a lot of character to hit back and after Matthew Flynn, a prominent figure at centre-half-forward, was narrowly wide with a goal attempt the lead was regained when Colm Coyle fired over a free in the 51st minute.

Rankin then missed a handy free in failing to register the equalising point for Good Counsel and mighty St Mel’s proceeded to score 2-2 in a fantastic finish to emerge victorious.