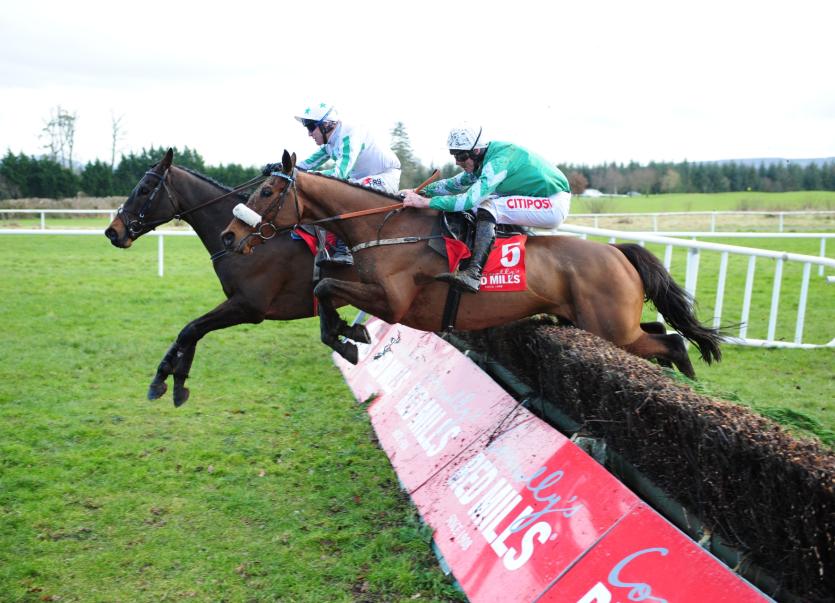 Gold Cup favourite, Presenting Percy, owned by Philip Reynolds and trained by Pat Kelly, will sharpen up for the big Cheltenham challenge by racing at Gowran Park.

The excitement in Gowran Park ahead of the big Goffs Thyestes Day meeting on Thursday, January 24 was given a massive boost when trainer of Gold Cup favourite, Presenting Percy, Pat Kelly, announced a run at the Kilkenny track was on the cards.

Kelly confirmed that the most likely route to Cheltenham for Presenting Percy will start in the John Mulhern Galmoy Hurdle on Thyestes Day.

“The going is almost invariably very soft at Gowran in January and a year ago Presenting Percy won this race on officially heavy ground,” he said. “All is good with him and we’ll just try to get him out as soon as we can. As long as the ground is safe.”

Presenting Percy took in both races in 2017 en route to winning the RSA Chase at Cheltenham.

Gowran Park manager, Eddie Scally, was delighted with the prospect of Presenting Percy returning to Gowran Park for the Goffs Thyestes Day.

“We have everything crossed that the ground conditions will suit,” he added. “It would be unbelievable to have the Gold Cup favourite here. The fact he is considering two runs is just brilliant.”

On the going conditions, Eddie revealed ground conditions have been remarkably good for this time of the year, hence a lot of the equine super stars are still in their stables.

“It has been suggested 2017 Gold Cup winner Sizing John may also take in the John Mulhern Galmoy Hurdle,” he added. “Wouldn’t that be a race for the ages? Today the ground is yielding to soft which would suit, but I would expect rain between now and our big day so let’s just see what happens.”

The Goffs Thyestes Chase will be run at the Gowran Park racecourse on Thursday, January 24. Gates open at 11am. The first race goes to post is at 12.45pm.

Tickets are available on www.gowranpark.ie or at Gowran Park on the day, priced at €20 for adults and €15 for OAP/students.

Group discounts are available by contacting Gowran Park (056 7726225). Courtesy buses will run from Kilkenny Castle Gates at 10.45am on the day and return one hour after the last race.