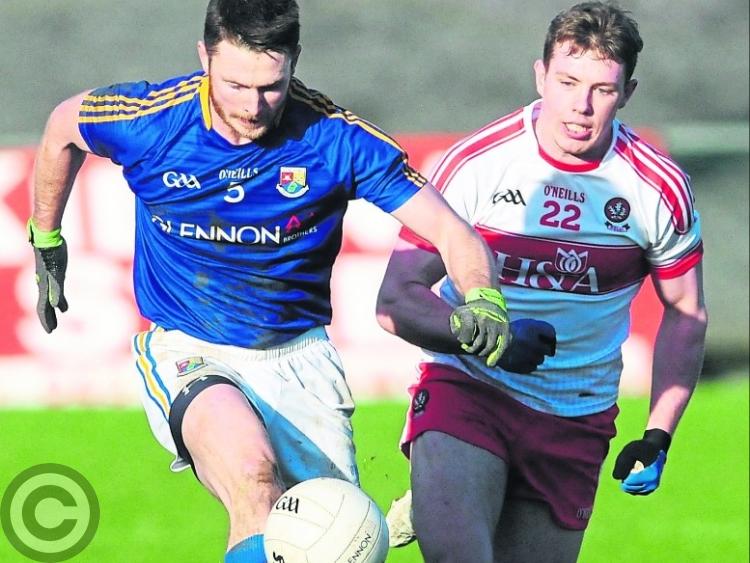 They say continuity breeds success and after this performance Longford supporters can perhaps start eyeing a possible promotion push after Denis Connerton’s side dispatched an out of sorts Derry side with the minimum of fuss at Glennon Brothers Pearse Park last Sunday.

Fresh from their 11 point demolition of perennial adversaries Offaly, Longford made it two wins from two with a seven point winning margin over the 1993 All-Ireland champions.

The cynics will undoubtedly point to the absence of a number of key performers, most notably defensive stalwary Chris McKaigue on the Derry side, but this is a Longford outfit who are growing in confidence under their Rathcline mentor.

Perhaps even more telling was the fact the hosts didn’t have to call upon star marksman Robbie Smyth, who endured a decidedly rare off day in front of the goalposts.

Unlike the O’Connor Park encounter, this was an affair which saw a more diversified scattering of scores with timely efforts come from both the full back and half back line.

That cancelled out Enda Lynn’s opener for Derry after barely 30 seconds had lapsed on the clock.

The tone of what was to inevitably come was eloquently demonstrated moments later as captain Donal McElligott strode forward from corner back to finish off a free flowing Longford move six minutes in.

The worrying sight of seeing a pain stricken Sean McCormack being carried off the Pearse Park turf might have interrupted the Longford of old. This is a different looking outfit under Denis Connerton however.

There appears to be a sterner look to the squad, something that was played out by McCormack’s replacement, James McGivney seconds later as he dispatched a thumping 40 metre effort over the Derry posts.

The one blot on the hosts copybook came just before half-time and maybe served to illustrate the frailties that Connerton and his band of selectors will be keen to iron out ahead of the Armagh clash.

Looking to press home their advantage, Longford squandered possession on half way and within the space of half a minute the ball was in the home net as Enda Lynn punched into an empty net.

It was a neat, crisp counter, but one that could have been easily snuffed out had the Longford manager’s pre match goadings of possession retention been better adhered to.

And when you consider that for all their dominance, Longford only had a two point cushion to show for their exploits at the break (0-6 to 1-1), not even the most fairweather of Longford followers would have been wrong to surmise what Connerton’s half time pep talk was loosely focused on.

Whatever was banded about inside the four walls of the home dressing room worked the proverbial treat upon the resumption.

Michael Quinn, so long the talisman for Longford, lived up to that lofty billing six minutes in as he left three Derry opponents trailing in his wake to fire into the bottom right hand corner of Oran Hartin’s net. It was a timely intervention and one that served to put a more fitting look to the scoreline.

It also knocked appeared to knock the stuffing out of Derry, who only managed to post four low key scores for the remainder of the second half.

Two of those came in the final five minutes, long before the home side had taken their foot off the offensive pedal and as many supporters could be seen heading for the exit, safe in the knowledge that another two league points were in the bag.

Next up is a trip to Armagh on Sunday. Connerton and his rapidly improving charges will know a similarly positive result in the Athletic Grounds will invariably trigger talk of a possible promotion push to Division Two.

Much of the focus this week, at least from a medical point of view, will centre on the fitness of Sean McCormack who is rated extremely doubtful for the top of the table clash against Armagh.

The Killoe man has enjoyed a fine start to the campaign, bagging 1-4 against Offaly, and played a prominent part in keeping the Derry defence firmly on the back foot until his premature departure on Sunday due to injury.

For now though, this is a Longford side who are two wins from two in a competitive football campaign and confidence is increasing. When did those in the blue and gold get a chance to say that last?