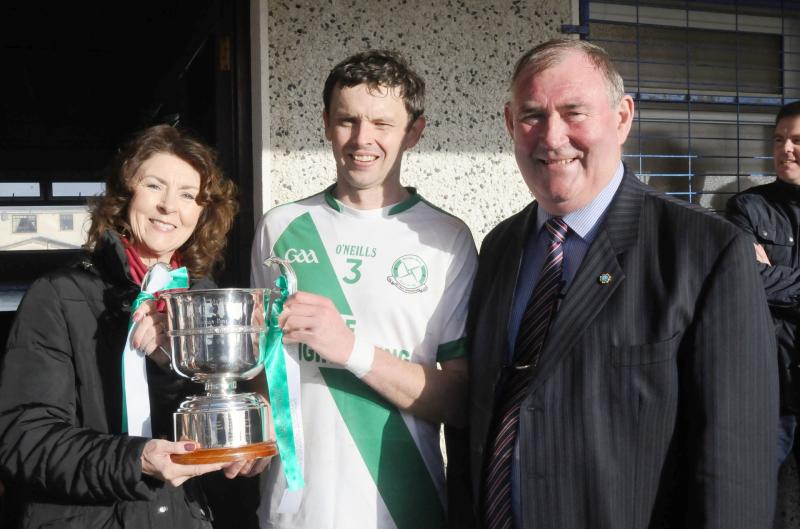 St Brigid’s Killashee captured their fourth Longford intermediate football championship title, their first since 2011, when a second half score burst where they scored 1-5 without reply between the 40th and 56th minutes, was enough to dismantle their near neighbours Cashel.

The clubs were level on four separate occasions during a low scoring Mulleady Group Intermediate Football Championship Final at Glennon Brothers Pearse Park this afternoon. They were deadlocked at the interval 0-3 apiece and it was 0-5 all, when Killashee, who already defeated Cashel by 2-9 to 1-11 during the group stage of the championship, made their decisive break for the finishing line.

Willie Skelly (3) and Mel Shanley (2) slotted over the points, and Darren Carberry executed a penalty as Killashee moved into a 1-10 to 0-5 advantage and after that they simply weren’t going to be caught and it was a delighted captain Ger Evans that accepted the Gerry Hennessy Cup at the final whistle.

Killashee, who were beaten in last year’s final by Rathcline, began brightly and after 12 minutes they enjoyed a 0-3 to 0-1 advantage, with all of their scores coming from frees by Willie Skelly (2) and Francis Dolan.

By half-time, Gerry Lynn managed Cashel, who were bidding for a seventh intermediate title (their first since 2009), had restored parity, 0-3 apiece, with their scores coming from Andrew Farrell, Padraig Farrell and Gary Kenny (free).

Killashee's Kealan Cox was black carded during 1st half additional time and he was replaced by Mark Rossiter.

These neighbouring clubs, who are amalgamated at underage level, were level on two further occasions - 0-4 all & 0-5 all - during the opening eight minutes of the second half, before Ray Curley’s Killashee charges landed three points without reply to put some daylight between them.

Mel Shanley and Willie Skelly (2 frees) delivered the scores that put Killashee in the driving seat and 0-8 to 0-5 ahead.

The Brigid’s then surged further clear as Francis Dolan was brought down at the expense of a 54th minute penalty that was confidently blasted to the twine by Darren Carberry. Skelly (free) and Shanley quickly followed up with points and suddenly, Killashee found themselves eight points ahead, 1-10 to 0-5 with 56 minutes elapsed, and they were never going to be overtaken at that stage.

Aidan Rowan (converted free) pulled back a 58th minute point for dejected Cashel and fittingly it was Killashee’s leading scorer, the experienced Willie Skelly that grabbed the final score of this contest.

Killashee will now represent Longford in the Leinster Intermediate Club Championship where they will be at home against the Laois intermediate winners on Sunday, October 23.

While Cashel will play in the Leinster Club Junior Championship and on October 9 they will be away to the Meath junior kingpins.