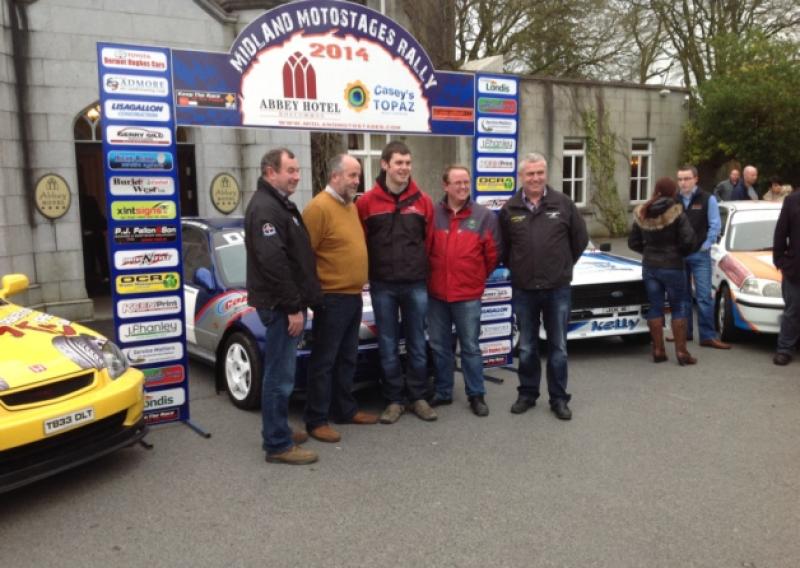 The Midland Moto Stages Rally in association with the Abbey Hotel and Caseys Topaz Filling Station will bring the roads around Roscommon town to life this weekend - Saturday & Sunday, March 29 & 30.

The Midland Moto Stages Rally in association with the Abbey Hotel and Caseys Topaz Filling Station will bring the roads around Roscommon town to life this weekend - Saturday & Sunday, March 29 & 30.

The event has attracted a great entry of World Rally cars, production and modified cars to entertain the spectators who will line the hedgerows on the stages north and west of Roscommon.

There will be plenty of local interest throughout the rally classes as Kenagh’s Tommy Doyle will run out in his Renault Clio.

Stephen Healy and Shane Healy will compete in their Twin Cam and Peugeot 205, respectively.

On Saturday, March 29 the competing crews will converge on the town to spend the first day driving the stages and writing the safety pacenotes in order for the crews to pass through the stages competitively on Sunday.

The focus of the event will move on in the afternoon to Dermot Hughes Cars on the Athlone Road for pre event Scrutiny, then following on to the event Shakedown at Cloverhill.

Shakedown gives the crews a chance to become familiar with the cars before hitting the stages on Sunday.

From Shakedown it is back to the Convent of Mercy School in Roscommon for the overnight Parc Ferme.

Sunday will start from Parc Ferme at the Convent of Mercy School at 9.45am and the first of nine stages to be travelled will start at 10.18am with three loops of three stages moving through the areas of Dunamon, Ballinaheglish and Fourmilehouse.

For those who don’t fancy standing on a soft footing, you can catch the cars at the service area at the Roscommon Arts Centre in Roscommon Town. The Finish Ramp and the spraying of the Champagne will follow the last stage at the Abbey Hotel at 5.20pm.

Some of the top drivers in the country will be in Roscommon.

Last year’s winner, Chris Armstrong will wear the number one door panel on the road this weekend and following on his heels sharply will be former Billy Coleman award winner and British Rally Championship favourite Daniel McKenna running on the new Pirelli tyre for the Historic Rally Cars.