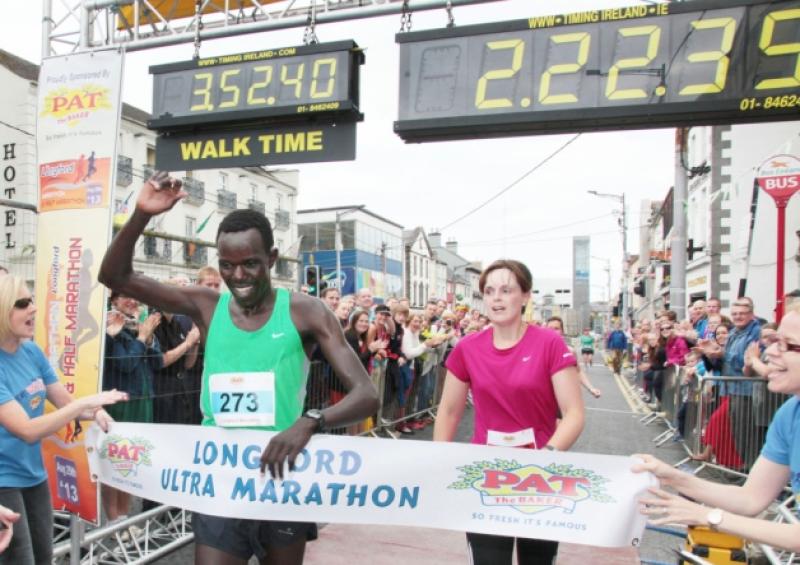 Sunday was a day of celebration, a day when Longford and its folk put on a show like no other.

Sunday was a day of celebration, a day when Longford and its folk put on a show like no other.

Twelve years on from its first staging, the Longford Marathon, sponsored by Pat the Baker, returned with an occasion many are already terming as its most impressive thus far.

Similarly, it was a day for records as both the ladies and men’s course records went, reflecting the event’s success in attracting athletes of the highest calibre.

One of the pre-race favourites in the women’s section, former Olympian Pauline Curley lived up to that standing as she saw off all-comers in just over 2 hours and 44 minutes.

Of the other sections, Waterford’s Philip Harty came out to in the men’s half marathon (1.08.44) while Michelle McGee was the first competitor home in the women’s equivalent (1.25.08).

Possibly the day’s most admired participant was Brian Dunne who was first to cross the line in the 39-mile ultra marathonn (5.05.21).

Equal kudos was given to Kenagh’s Sinead Phelan after she emerged victorious in the womens category (5:43.14).

That particluar slice of local success was a trend that would dominate much of the afternoon’s action as well wishers lined Main Street to welcome the athletes home.

Brian Stakelum claimed the enviable honour of being the first Longford man to cross the finish line, closely followed by Lorcan Gearty.

Liam Fenelon managed the remarkable feat of notching up marathon number 258 on Sunday.

Not to be outdone, relay runners proved just as Bernie Belton and the crew from CASA finished the relay event for their seventh year for what has readily become one of the region’s most popular causes.

Perhaps not surprisingly, messages of appreciation have been flooding in to organiseres .

One 0f the athletes whoo took part in the event for the first time, Lisa Van Wanrooy wrote in an email:

“Everything was so top class and well organised.”

Warm words they maybe, they are ones that are shared by organisers this week.

“From what was a fantastic day, it genuinely deserves to be called the ‘friendly marathon in the heart of Ireland,’” she added.

Who can argue with that?