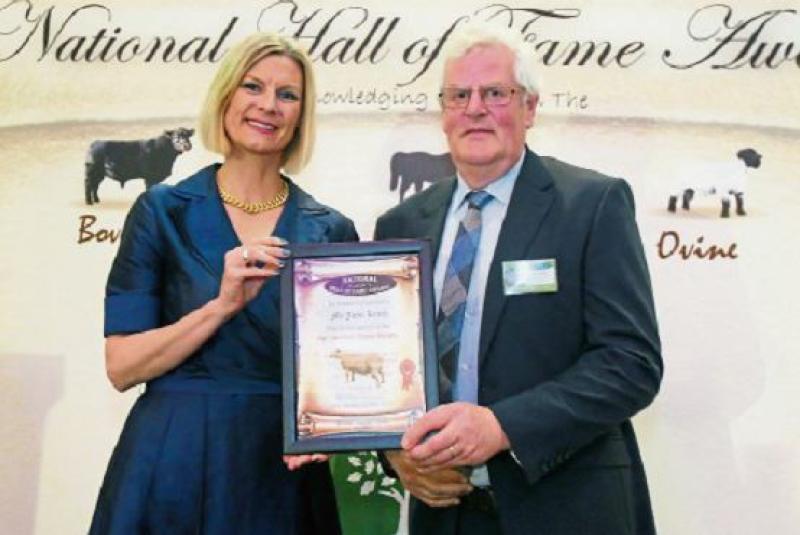 A Longford farmer was honoured at the 18th National Hall of Fame Awards presentation and banquet held in the Sheraton Hotel Athlone, on Sunday May 1.

John Lynch from Ballinascraw, Ballinalee was presented with the Irish Vendeen Sheep National Hall of Fame Award by Minister for Land Use & Biodiversity Pippa Hackett.

Twenty-one nominees from the Bovine, Equine and Ovine industries were inducted into the postponed 2020 National Hall of Fame, before an attendance of four hundred guests from all over Ireland.

Freda Kinnarney, Secretary & Operations Manager, Tullamore Show (now retired) received a “Lifetime Achievement Award” In recognition of her 28 years of service, dedication, and organisational skills, for the benefit of the show-going public.

Adrian Keegan, Keegan Feeds, Athleague, Co Roscommon received the “2020 Farmers Oscar Award” in acknowledgement for his Back-Saving Innovation “The Meal Riser “ making meal feeding on the farm a much safer task to operate.

Michael Flanagan, whose idea it was way back in 2003, said that people from the Bovine Equine and Ovine industries should be recognized and acknowledged for their dedication, commitment and the outstanding service they have given, for the betterment of their particular breed, while they are still with us, rather than writing glowing obituaries when they have passed away.

Michael who acted as MC for the night, ably assisted by his son Oliver, said that the National Hall of Fame has grown year on year and the problem now is trying to accommodate the growing demand for tables.

Michael expressed his thanks to the main sponsor FBD Insurance for their support & becoming lead sponsor of the event. To the Kepak Group for sponsoring the Ovine Section. The ABP Group who have supplied and sponsored the Certified Irish Angus Beef for the dinner over the years was once again superb.

Michael also acknowledged and thanked the Certified Irish Angus Producer Group who have supported the occasion since its inception.

A most enjoyable night was had by all and dancing went on to the small hours with the TR Dallas Band.