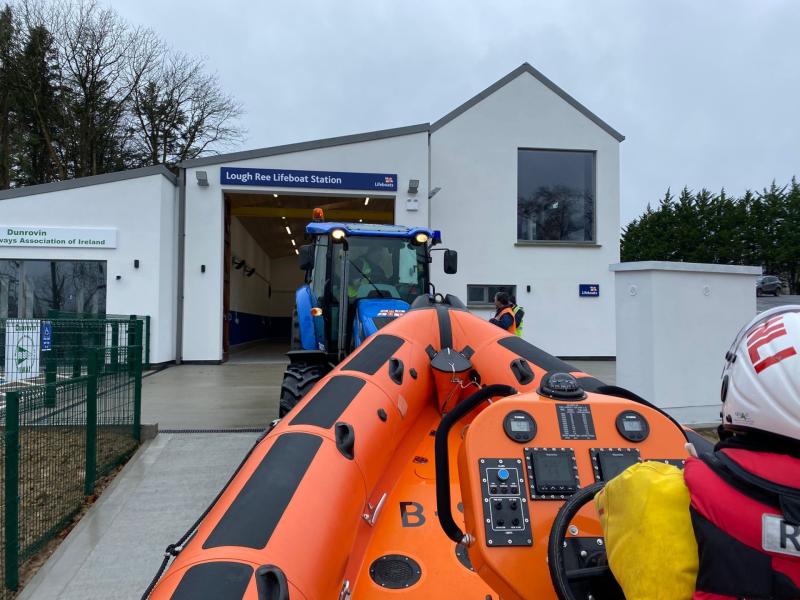 Following a series of familiarisation and training programmes over the last three weeks the volunteer crew at Lough Ree RNLI is in readiness for the move to its new state of the art boathouse in Coosan later this month.

The boathouse was built at a cost of €1.2m, funded exclusively by  charitable donations, including a local community contribution of €100,000 raised in the midlands last year.  Construction of the boathouse, which began in late 2020 was interrupted by the pandemic  and was completed in February.  The fitting out programme has been ongoing over the last number of weeks and it is expected that following the installation and testing of electronic and IT systems the boathouse will go into service before the end of March.

Alongside the weekly training sessions on the water, the Lough Ree RNLI volunteer crew has been engaged in an intensive familiarisation programme of the new facility and its systems. The new boathouse slipway will provide direct access to the lake for the charity’s lifeboat ‘Tara Scougall’ and her crew.  The boathouse will also facilitate improved response time to emergencies, a specially designed training room and excellent crew facilities.

Lifeboat Operations manager at Lough Ree RNLI Kevin Ganley said: ‘This is a fitting way to celebrate the 10th anniversary of the charity on Lough Ree and could not have been achieved without the generous contribution of the local community and those further afield.’

The official opening of the Lough Ree RNLI boathouse will take place in June at an open air ceremony at which the charity’s lifeboat ‘Tara Scougall’ will also be formally named and handed over to Lough Ree RNLI.

The temporary structure which has served Lough Ree RNLI well over the last number of years at Coosan will be decommissioned, dismantled and transferred to another RNLI facility.