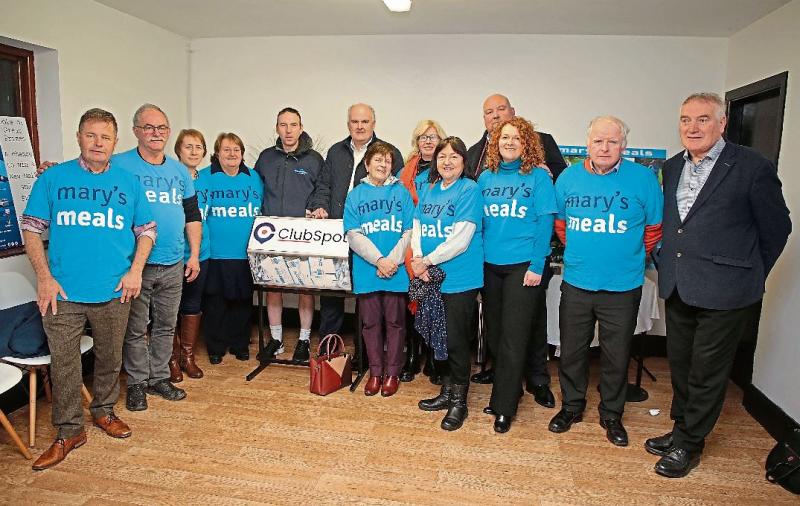 There was a distinguished gathering present to witness the event. Fr Michael McGrath, St Mel’s Cathedral was in attendance, as was John Pridmore from Carrick-on-Shannon, the former ‘bad boy’ who changed utterly to back bone the Mary’s Meals organisation from when it started.

John outlined how he met Magnus MacFarlane-Barrow, the founder and Global CEO of Mary's Meals, and the role the charity continues to play in his life today. John is a well-known author who has donated many of his books to Mary’s Meals draws.

A Donegal lady living in Cavan, Patricia Friel, is Executive Director of Mary's Meals Ireland, and another staunch worker for Mary’s Meals. She gave an enthusiastic talk on the work of Mary’s Meals for hungry children who get fed while at school and who, hopefully in time, will become leaders in their own countries of Benin, Ecuador, Ethiopia, Haiti, India, Kenya, Lebanon, Liberia, Madagascar, Malawi, Myanmar, Niger, Romania, South Sudan, Syria, Thailand, Uganda, Yemen, Zambia, Zimbabwe, ensuring starvation will become a thing of the past.

Fr Sean Casey PP of Killoe stated that most of the western world have no concept of hunger. In Ireland present generations have never been touched by starvation. There are very rare situations where there is a lack of food but not to starvation levels. Mary’s Meals, similar to the old co-op movement in Ireland, have as their motto “everything is local.”

Chairperson of the Longford branch of Mary’s Meals, Dolores Kiernan expressed sincere thanks to the ticket sellers who went out in all weathers, to the streets, parishes, marts and football matches, who asked and begged of their family, friends, staff and acquaintances to purchase tickets.

She said, “Each ticket in this massive drum draw represents a child being fed for a full year at school,” adding, “To so many people who bought one ticket or 20 tickets – thank you all.”

Ticket sellers also received donations from people who did not want tickets and these were acknowledged as were the Longford companies who made donations, including a large cheque received anonymously on the night of the draw which Mary’s Meals wished to acknowledge.

The draw was postponed from December 31 to February 11 due to Covid. While out selling tickets, most of the Longford team contracted Covid-19 so they were stalled in their sales for over four weeks. Permission was requested and received from An Garda Siochana to postpone the draw, with Mark Connellan and Superintendent Boyle being thanked for their assistance.

Mary’s Meals would not exist in Longford but for the supreme efforts of Kitty Ross. Mrs Kiernan explained, “At some stage Kitty would have approached every person at the event, individually, to come on board.

All of them had absolutely no idea what a powerhouse of energy Kitty is, not just for her faith, but for the hungry in the world, especially the children. Kitty is doing extraordinary work.” She wished Kitty a speedy return to full health as she is not at her best at present.

Mrs Kiernan said Longford Mary’s Meals had great help from so many people in setting up this draw and they need to be thanked.

“Mark Connellan and Supt Boyle, as previously mentioned, helped greatly. To John Hyland and his Club Sport organisation, John helped up with the QR code on the tickets, the use of his platform to buy tickets nationwide, even the drum containing the tickets was delivered by Paudge Gill, Drumlish, on behalf of Club Sport. John gave sound advice, confirmed also by James Clarke of Clonguish who has so much experience in fundraising draws. James was at the end of the phone and made the actual draw for the winning ticket.

“To Patricia Friel and her team in Mary’s Meals who looked after publicity on Facebook and Mary’s Meals website. To the Longford Leader and Shannonside who always come on board, unstintingly, to give us publicity. To Gabrielle Devine, our Treasurer, and her family, she has had the worst job of all in ensuring monies matched ticket sales. Gabrielle never whines, she is a rock and she needs to be thanked publicly.

“To Louis Herterich and his family who are also always on hand to help out. Louis is the one that is turned to for advice, research, best policy. In fact everything, without Kitty, Gabrielle & Louis, Longford Mary’s Meals would be a very pale imitation of what it actually is. Louis also feeds everyone. The food laid on after the event was organised and supplied by Louis and his family free of charge. Also to Kate Herterich for recording the draw.”

Draw and the winners

The fifth prize was picked by Fr Michael McGrath who had walked with the Mary’s Meals group to Roscommon, on their walk to Knock, and he selected David Kelly, Granard, Co Longford as the winner of the sponsored Escabar voucher.

The fourth prize was picked by Joe Flaherty and he drew out Mary Traynor from Monaghan as the winner of the sponsored Louis Herterich voucher.

The third prize was selected from the drum by John Pridmore and the winner of a Center Parcs voucher was Conor MacBeen from Tipperary. This voucher was supplied anonymously.

The second prize was drawn by Mark Connellan and this went to Lisa McMonagle from Donegal, winning a Lenovo Laptop Computer sponsored by CT Computers, Longford.

Finally, the first prize winner, of a brand new VW Golf, was plucked from the draw drum by James Clarke, and confirmed by Mark Connellan, with the prize going to Paul Brady of Ennybegs, Co Longford.