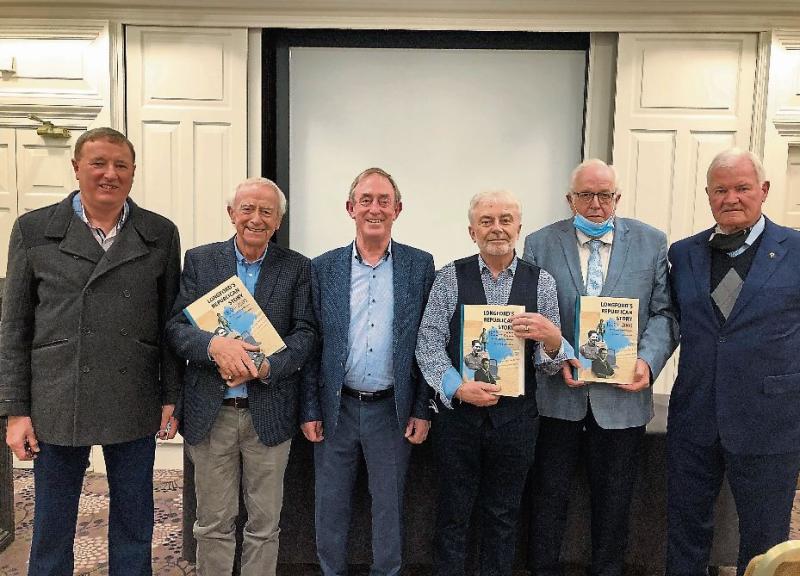 It represents five years of intense work and research by Sean which will enrich all Longford readers, and many much wider afield, even those with only a passing interest in history.

Upwards of thirty attended the launch, most of whom were Dublin based Longfordians, while others had Longford connections.

The book is laid out in clear order and covers all the major historic events within the period both nationally and in Longford: Easter Rising, War of Independence, followed by The Truce and The Treaty.

It takes us through The Civil War in Longford in the early years of the Free State, Fianna Fáil in government from ’32, the IRA and Blueshirts late ‘20’s through the ‘30’s, internment and executions in the 1940’s, the evocative election of Ruairi O Bradaigh to the Dail in 1957, the Border Campaign of the ‘50’s and the more recent Northern Ireland Troubles (1969 – 1998), focusing on incidents with Longford connections.

Speaking at the launch, interspersing his words with beautiful Irish, the author – originally from Colmcille, now living in Ballinamore - said the Longford book was modelled on the Leitrim book covering the same 100 years of conflict, authored by his son, Cormac O Suilleabhain. However, he said, the Leitrim story differed from the 100 year conflict in Longford in that the War of Independence took up half the Longford book.

Further reinforcing that appraisal, the author said that when the outstanding leader, Sean Mac Eoin, was arrested during the War of Independence, Michael Collins remarked “Cork is fighting on its own now”.

Many Longford readers will undoubtedly find the names of some of their ancestors who may have been active in the Easter Rising, the War of Independence and/or the Civil War.

This will add to already great interest in this impressive work which, once read, will also be a reference book which will settle many a current or future discussion! It is important that this book has been written, serving as it does as a superb record of Longford’s history in the run up to Independence and afterwards.