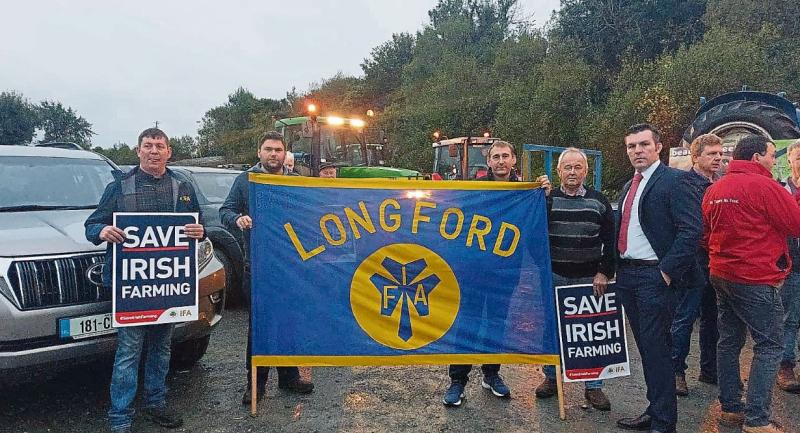 IFA held four regional rallies in Cavan, Roscommon, Portlaoise and Cork last Friday to protest on the streets over fears for the future of their industry.

Farmers from Longford joined with hundreds of their colleagues taking part in the Cavan and Roscommon rallies.

Longford IFA Chairperson Gavin White was delighted with the turnout at 7am in Cavan.

He said farmers are the backbone of rural Ireland, adding that carbon tax is heavy handed as the alternative to diesel tractors has not yet landed.

He continued, “Peat harvesting in Ireland has been banned and forestry licences cannot be obtained to clear our lands. The nitrates action plan is a disgrace and the government needs to meet us face to face.”

President of the IFA Tim Cullinan addressed the crowds at the rallies.

“The budget is for a 51% reduction in emissions by 2030. We're not going to cut cows or anything, but a 51% reduction is a serious place. We need our Government to get into negotiation with us, we have tried for the last two years.

“The CAP was introduced in 1950 to protect quality food supply and farmers, that money is being robbed now.

He said that they must be allowed to spread slurry until mid October as it is a valuable and organic fertilizer. Mr Cullinan said that Bord na Móna has been funded to transition out of peat harvesting but that farmers with bogs are getting no money.

“Our horticulture sector is using peat imported from Russia, it’s a ridiculous situation. There is a shipment of 42 thousand tonnes of woodchip coming to supply peat fired power station, and they are talking now about going back to coal in Moneypoint.

"It’s absolutely ridiculous. We put forward credible proposals for renewable industries in Ireland, we are ready and willing, but there is no interest from our Government to do it. If we develop biomethane on just 5% of our grassland, we can supply and fuel all the trucks we have in Ireland.

"We want to work in good faith with our Government but we can't do it while we are out on the streets, and we're not backing off on this if we don’t get a response. There is no way we can back off and let our Government allow our industry to fail," he said.

National Dairy Council chairperson Stephen Arthur said there is “no way we are giving up our cows or our business.”

"They asked us to raise our numbers and dairy farmers grew and invested in their own businesses. Up to €2.5 billion in the last five or six years. We followed them all the way to the top of the hill and now they are trying to shove us off.

"Make no mistake, the Climate Change Bill is a massive and real threat to the agri sector, be it beef, dairy, tillage or sheep. It is a threat to your viability and economic wellbeing.

"We realise there is a lot to do and we can contribute, but we will not stand for being made scapegoats. I say this now to the Minister and the Government, we want negotiation. Keep those signs ready and keep those phones on because we will be marching again," he said.

Clubs across Ireland will join in the initiative on Friday

Rachel McIntyre and partner Aaron lost their baby in June 2016. Rachel speaks to Liam Tunney about how throwing herself into restarting Drum's camogie team helped her cope with her grief, and speaks about her campaign to light up Ireland's GAA clubs for Baby Loss Awareness Week.