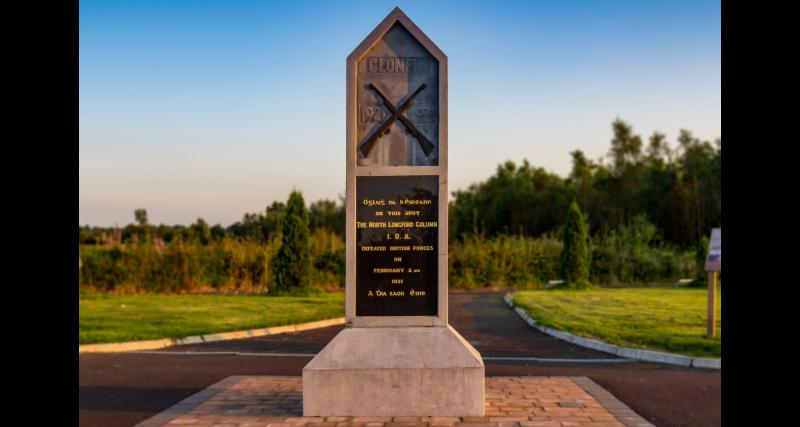 A ceremony to commemorate the centenary of The Clonfin Ambush which took place on February 2, 1921 during the War of Independence, will now be held over the course of this weekend September 25-26.

A pre-recorded ceremony was streamed online to mark the historic action around the centenary date, Sunday, February 7, but in-person events had to be postponed due to public health restrictions.

A walk and a ceremony are now set to take place, at the site of the battle between Ballinalee and Granard, this Saturday and Sunday. Organised by Longford County Council, in partnership with the Clonfin Commemoration Committee, the events are part of the Decade of Centenaries Programme.

The ambush was one of the major actions in the War of Independence in Longford and the wider region. Members of the North Longford Flying Column, led by Seán MacEoin, defeated a party of Auxiliaries, a force specifically recruited to fight the IRA, on February 2, 1921. Four of the Auxiliaries died as a result of the action.

Aside from the ambush being successful from a tactical point of view, it was also remembered for the humanity with which the column members treated the defeated men. They tended the wounded and allowed the dead and injured to be taken back to Longford.

On Saturday, September 25 at 2pm, Sr Maeve Brady RSM, a daughter of one of the flying column members, will lead a walk of the battle site.

Sr Maeve is a long-standing member of the Clonfin Commemoration Committee.

In February, her unique project ‘A Time to Remember’ was launched. In it, she recounts her visits to the graves of the four Auxiliaries who died as a result of the ambush and reflects on the importance of inclusive remembering.

On Sunday, September 26, relatives of the twenty-one flying column members will gather for a ceremony at the site. Attendance at this event is by invitation only, in order to comply with public health guidance on outdoor gatherings.

Cathaoirleach of Longford County Council Cllr Peggy Nolan commended those behind the commemoration of this event. “I want to pay special tribute to the Clonfin Commemoration Committee along with the employees of Longford County Council, for the work they have done to ensure that this important part of our local and national history be commemorated in such an appropriate way. I am delighted to see that we are coming out on the other side of this pandemic and able to work with our communities on such worthy projects.”

Chief Executive Paddy Mahon agreed. “The Decade of Centenaries Programme has reminded us of the importance of commemoration and retaining the local knowledge and connections to our rich local heritage and history.”

Anyone interested in taking part in the walk at 2pm on Saturday, September 25 is asked to call Longford County Library on 043-3341124 or email decadeofcentenaries @longfordcoco.ie to register. The walk is over 1km in length, so those joining in are advised to wear appropriate clothing and footwear. All who plan to attend must register in advance and are urged to observe public health regulations.