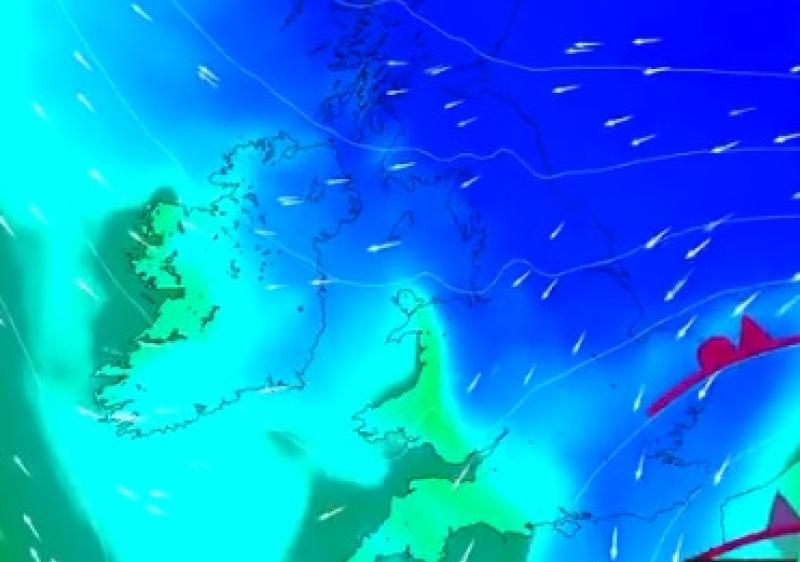 Weather being pushed from the east accross Europe

Met Éireann's official storm weather forecasting partner has declared a Status Red warning for Storm Darcy which is caused by a bitterly cold front pushing east from Russia towards Ireland.

There have been just three storms this winter and the Dutch service has named the fourth on Friday. It issued a Status Red alert on Saturday.

"On Sunday, code red (weather alert) is in effect for snow in combination with a lot of wind and light to moderate frost," said its forecast.

Storm Darcy will also bring gale-force winds which will cause snowdrifts.

The conditions that have caused Storm Darcy are explained by Met Éireann's other partner, the Met Office in the UK. They have warned of snow in the southeast of England.

The Met Office explained what is causing the storm which will raise the risk of snow in the week ahead in Ireland.

"Cold air emanating from Russia and Eastern Europe will move across the UK over the coming days," said its statement on Storm Darcy.

It has also tweeted to show the weather being pushed across Europe. More below tweet.

Easterly winds will draw cold air across all of the UK by the end of the weekend. Strong winds and ⚠️ heavy #snow ⚠️ will affect parts of the southeast, with snow showers across other eastern areas.

Met Office Chief Meteorologist, Paul Gundersen, said: “The UK is in for a notably cold and snowy period over the next week, with very cold air in place over the whole of the UK by Sunday". MORE BELOW TWEET.

Storm #Darcy has been named by the Dutch Met Service, KNMI, and is set to bring strong winds and heavy snow to southeast England late on Saturday and on Sunday, this easing through Monday

Met Éireann says this weather from the East will have an impact in Ireland.

"Our weather is expected to turn progressively colder from early on Sunday 7th February, with the cold spell now looking likely to last well into next week," said a tweet.

Met Éireann has also warned that snow is on the cards this week with a commentary saying there is a risk of 'significant and lasting snow' due to the weather from Russia.

Last February Ireland was battered by Storms Ciara, Dennis and Jorge, which swept in from the Atlantic. This year Ireland has escaped the worst of a repeat of the Beast from the East conditions which caused Storm Emma in 2018.

Met Éireann has forecast that temperatures will tumble in Ireland from Sunday. Its summary outlook for the days ahead predicts wintry showers, mainly in eastern counties, largely dry elsewhere.

It says with will feeling very cold during the day with low temperatures and a moderate to fresh wind introducing additional wind-chill while frosty and icy nights are expected.  MORE BELOW TWEET.

With conditions on the footpaths set to turn icy this week, take extra care when out and about. To avoid slips and falls walk like a penguin when the temperatures fall below freezing. pic.twitter.com/Lluoz1Frwt

SUNDAY: Another cloudy day tomorrow with limited bright spells. Isolated showers will mainly affect eastern areas and southern coasts. Some showers will turn wintry in the northeast and east later. Highest afternoon temperatures of just 1 to 5 degrees, coldest over Ulster, but there will be an added wind chill factor in moderate to fresh easterly winds.

Isolated wintry showers will affect eastern and northern areas with a dusting of snow possible on Sunday night. Lowest temperatures of minus 2 to plus 1 degrees, coldest over Ulster, with widespread frost and ice, in moderating easterly breezes.

Monday: Scattered wintry showers will continue to move in from the Irish Sea onto eastern and northern coasts. Bright or sunny spells developing generally and staying mainly dry elsewhere. Daytime temperatures of 1 to 3 degrees in moderate to fresh easterly winds.

Wintry showers will become more frequent and push further inland later in the night. Very cold with clear spells and lowest temperatures of minus 3 to zero degrees with a widespread sharp frost under clearing skies. Mainly moderate easterly winds, fresh to strong in the southwest.

Tuesday: Staying very cold with temperatures through the day of plus 1 to 3 degrees in fresh easterly winds, strong on southern coasts. Wintry showers will continue to feed in from the east, affecting mainly the northeast and east with some accumulations possible. More isolated showers will reach further inland. Very cold overnight again with lowest temperatures of minus 4 to zero degrees with severe frost and ice causing hazardous conditions. Winds will ease overnight with fog developing.

Wednesday: Further wintry showers will occur through Wednesday. Daytime temperatures only reaching 2 or 3 degrees for much of the country. Light to moderate easterly winds will freshen on Atlantic coasts towards the evening as a band of rain arrives from the southwest, gradually extending into much of Munster overnight, preceded by falls of sleet and snow. Another very cold night with lowest temperatures of minus 4 to zero degrees.

Further outlook: Very windy on Thursday with further falls of sleet and snow over much of the country, with more persistent rain developing in the southwest. Temperatures will increase towards the weekend.

Our 10 day Atlantic Chart shows the precipitation and pressure forecast in 6 hour intervalshttps://t.co/9Giuj4CR5m

A nationwide forecast and outlook covering the next week can be found here. https://t.co/9gKN6SVok4 pic.twitter.com/TECkvdP659

The next storm is Evert. Met Éireann, the KNMI, joined the Met Office in the west Europe storm naming group in 2020.