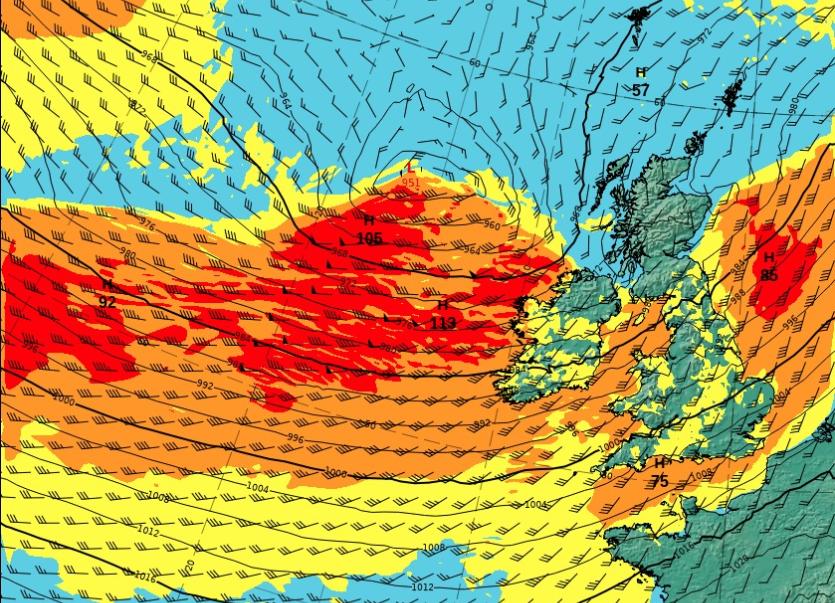 Met Éireann has put the country on alert that it expects to issue more weather warnings on Sunday when the brunt of Storm Ciara is felt bringing heavy rain and winds of up to 140 km an hour to Ireland.

The forecaster has already issued a nationwide Status Orange wind warning for Sunday from 5am until noon. It tweeted on Saturday afternoon that more warnings are on the cards.

More orange level winds are expected with #StormCiara tomorrow, and additionally there is a status yellow rain warning in effect until 3 p.m. tomorrow. pic.twitter.com/3j4naF5pol

"It will bring extremely windy and in places stormy conditions during the morning. Southwest winds will reach gale to strong gale force in strength with damaging gusts likely.

"These gusts will affect parts of the country not normally impacted by such strong winds. Gusts will typically range between 100-130 km/h but they may exceed 140 km/h locally," the said.

There is also a risk of flooding.

"We are in a period of Spring Tides and these will coincide with very high seas which will start today Saturday and will continue into next week.

"The combination of Spring Tides, high seas and extreme winds or stormy conditions will result in a significant risk of coastal flooding especially along northwestern and western coasts. This risk will persist into the middle of the coming week.

"Storm Ciara will also bring very wet conditions with localised flooding possible as intense falls of rain spread across the country with some embedded thunderstorm activity," said the commentary.

They also advised about wintry weather to follow the storm.

"As Storm Ciara moves away on Sunday colder air is introduced over Ireland. This will bring scattered wintry precipitation later on Sunday night. The risk of snowfall increases as we move into the coming week. While snow showers may occur anywhere they will occur chiefly in parts of the north and west," they said.

Also read: Get me to the polling booth on time! Bride casts her vote prior to getting married #GE2020