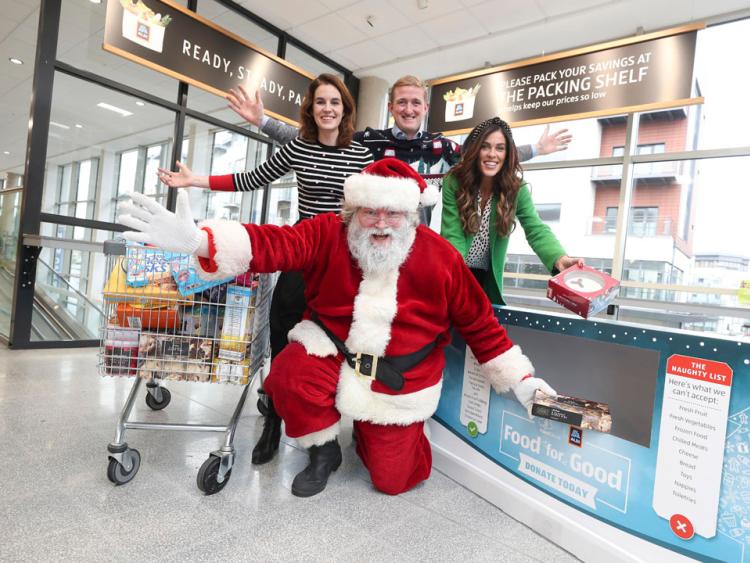 Photographed at the launch of the ‘Food for Good’ Christmas Campaign in the Aldi Royal Canal Park Store from left to right: Co - Founder of FoodCloud, Aoibheann O’Brien, Aldi Communications Director,

A new independent survey from Aldi has found that Irish shoppers waste 50% more food during Christmas week than compared to the rest of the year. Households in Longford throw out over €400K worth of food each year, peaking at Christmas time, when households waste half as much again - the equivalent of thousands of Christmas dinners.

Despite shoppers reporting an increased propensity to help charities during the festive season (with 69% responding that they were more likely to give to charity at Christmas), only 21% of those surveyed donated excess Christmas food to those in need last year. The news comes as supermarket Aldi launches its Food For Good campaign with FoodCloud, whereby customers can purchase and leave food donations in their local store, so that it can be distributed to local charities.

The campaign has seen Aldi stores across the country pair directly with charity partners, with partnered charities able to visit their local Aldi store to pick up donated food daily for the duration of the campaign. Harmony House Community Centre and St Martha’s Hostel are some of the charities that will be feeling the benefit this year.

Announcing the launch of the ‘Food For Good’ Christmas Campaign, co-founder of FoodCloud Aoibheann O’Brien said: “We are asking Aldi shoppers to help us in doing good for those in need across the country by donating in store. We have over 100 local charities partnered directly with Aldi stores across the country, ensuring the food donated will be going to those most in need in the community.”

Also read: Ballymahon students encouraged to carry out good deeds in their locality

Aldi’s partnership with FoodCloud has ensured charities around Longford receive regular deliveries of excess food from Aldi stores. To date charities in Longford have received over 16,000 meals from the partnership – equating to a saving of more than €20,000 for the charity partners involved.

Also speaking in advance of the launch, Aldi Group Buying Director John Curtin said: “Now in its second year, Aldi’s Food for Good campaign in cooperation with FoodCloud has helped to make Christmas that little bit brighter for those most in need. In addition to helping others, the initiative helps shoppers tackle the issue of food waste, which sees a significant increase at this time of year."

The following non-perishable items are requested as donations to the ‘Food For Good’ Christmas Campaign:

Also read: Returned emigrants to Longford encouraged to join Back for Business