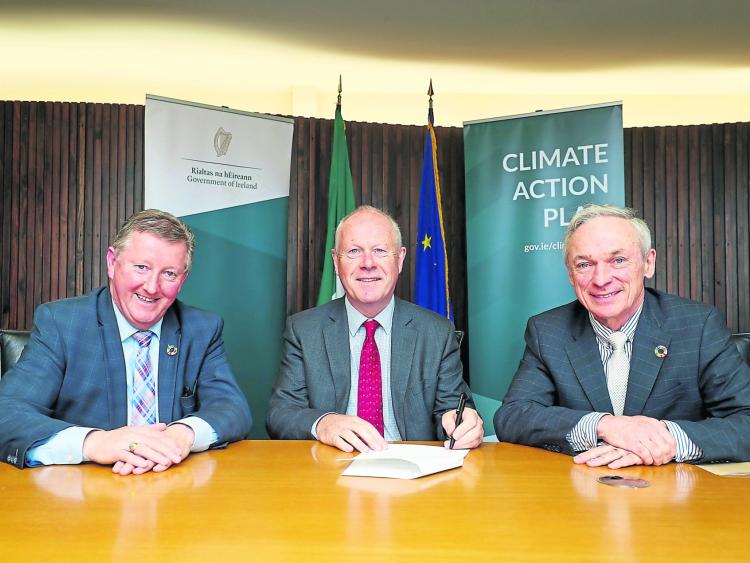 Mr Bruton, together with Minister of State Sean Canney signed a charter last week with all 34 local authorities, including Longford, committing them to driving forward meaningful climate action in their communities, through policies set out in the Climate Action Plan.
“The public sector leading by example is a central pillar of the Climate Action Plan,” said Mr Bruton.

“I am determined that government, both at central and local level, will lead the way in our response to the climate challenge.”

The Climate Action Plan, published earlier this year, has long been heralded as the Government’s plan to ensure the State meets its 2030 climate commitments, putting Ireland to be on course to enjoy net-zero emissions by 2050.

The Charter's signing represents a key action in the plan and will ensure every local authority embeds decarbonisation, sustainable development and climate resilience into every aspect of the work they do.

“Given their pivotal role across the key sectors of planning, housing, transport and waste and their close relationship with the community, they have a crucial role in implementing the step change that is needed and influencing many more to address this challenge.”

His government colleague and Junior Minister, Sean Canney said the role of county councils was pivotal in ensuring Ireland stayed on course with meeting its carbon emissions targets.

“The key to achieving our Climate Action targets is to bring everyone with us. Local authorities are a focal point for our communities, villages, towns and cities and their support for this charter reflects the whole of society approach we need to take to transform our economy from brown to green,” he said.

The Charter commits local authorities to several actions that will ensure they play a key leadership role locally and nationally in delivering effective climate action. Among other commitments, all local authorities will: