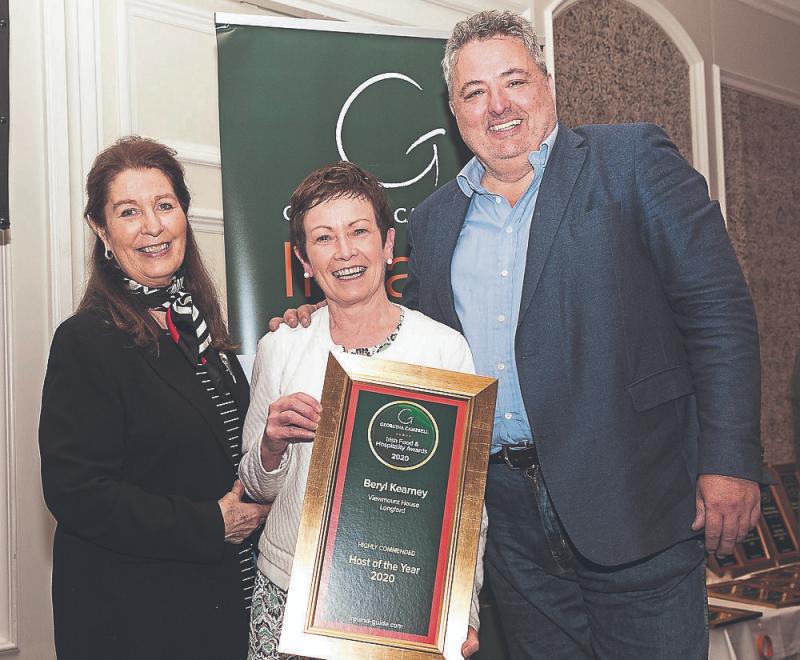 Beryl Kearney of Viewmount House, Longford was highly commended in the Host of the Year category in the Georgina Campbell Irish Food & Hospitality Awards 2020.

Celebrating 21 years in their current incarnation, the Georgina Campbell Awards recognise and honour Ireland’s standard-bearers in food and hospitality in Ireland with particular emphasis, this year, on the industry pioneers who put down quality markers a generation or more ago.

Amongst the many guests who attended the prestigious awards were Richard Corrigan, Darina Allen Michael Deane, Niall McKenna and Andy McFadden, all of whom are widely recognised as leading lights in the promotion of Ireland’s thriving food and hospitality industries.

She added, “I have been thinking a lot about the legacy of the wonderful Myrtle Allen - to whom the industry owes an enormous debt of gratitude and who we remember fondly at today’s event - and those of her generation who have laid down the unshakable foundations of quality. Many of these great people are still active and working alongside their children and often their grandchildren, and they are the pioneers of the genuine hospitality, sustainable food sourcing and innovation that Ireland is gaining a reputation for today

“Equally we can marvel at the wave of talented, skilled and motivated young people who are laying down new foundations and safeguarding the future for the generations to come.

"It’s a challenging time to be in food and hospitality right now, but it’s also a very exciting time and, in the main, standards are increasing at every level from ground-breaking new restaurants to casual dining destinations, street food trucks, cafés and bars. So much so, in fact, that selecting the shortlists for these awards was an even more demanding task than usual.”