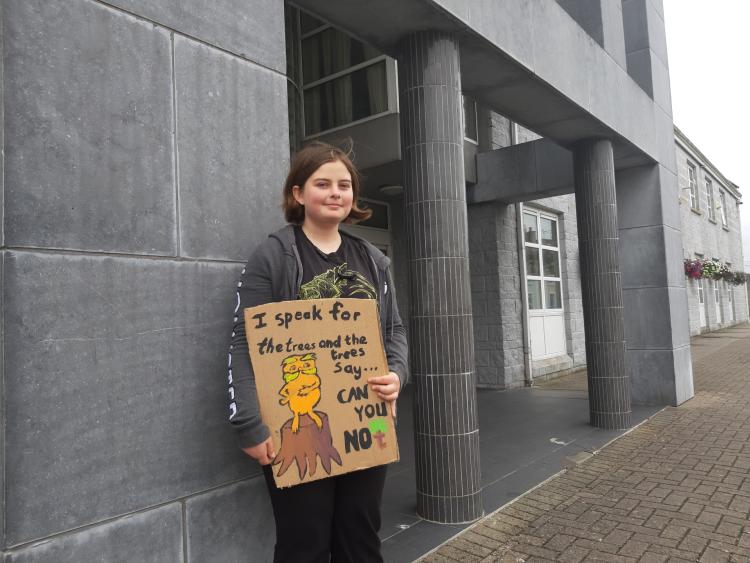 Eliza Jane Pearman, a 14-year-old student from Ardagh, has taken to the streets of Longford to highlight the lack of action in relation to climate change.

Eliza has taken up position outside the Longford county council offices over the past number of weeks, as part of the Fridays for Future initiative. The FridaysForFuture movement was one piloted in August 2018, by Swedish student Greta Thunberg. Many people have since joined Greta’s campaign, such as Eliza Jane.

Eliza has long held an interest in the need for changing the ways we address increased carbon emissions, fossil fuel use and climate change in general. This is what prompted her to take part in a Strike 4 change campaign in Dublin.

“It has been an interest of mine and important for a long time,” Eliza Jane explained.

“I first got involved in the strikes during a recent one in March up in Dublin, that my mother told me about and it just went from there.”

After this first taste of activist action Eliza was hooked, but she first faced a significant hurdle, which eventually led to her one-person protest outside the Longford county council offices.

She said, “I was always going to keep protesting, but the problem was that I was going up to Dublin to strike, which was using fossil fuels to get up there.

“So I said I might as well just do it here in Longford.”

Eliza has also set up her own social media channels to highlight her campaign, which you can find by searching Friday’s for future Longford. She usually strikes every Friday from 12 noon.

“Anybody can join in, the more the merrier,” she said.

Eliza will continue her campaign throughout the summer and says she will continue the fight/strike even when school recommences. She hopes it will lead to people reevaluating their ways and, in turn, sit up and take notice of the gravity of the problem facing us.

She told the Leader, “I just want to make people notice that this is a massive problem.

“People need to understand that they need to start doing something themselves.

“I just want to make sure that everybody knows, so everybody can help,” She continued.

Eliza chose her location at the Longford county council offices due to some of the powerful figures who grace the corridors there and the high volume of traffic which regularly pass by. She is hoping that someone within the council office will sit up and take notice of her campaign, and help implement some badly needed changes. Until this happens, she will not be moved.

“I am going to keep doing this until people start noticing,” She vowed.

Eliza admitted that one of the main frustrations of her campaign is that older generations seem to be passing the baton of responsibility over to the youth of today. She is adamant that the change needs to start now.

“Everyone is saying this is a problem for the future, our children will fix it, we won’t have time,” she said.

“But in ten years, we will be past the point of no return. I will be twenty four by then, that’s barely finished college if even.

“I won’t have time to do anything by then and neither will the people in my school. It is now that we need to take action, not in the future,” she reiterated.

Eliza also admitted that some of the responsibility must be shouldered by some of the larger companies producing a consistent high volume of carbon emissions.

“They don’t have any laws restraining them. There is nobody trying to stop them.

“We can help, but it is they who can make a massive difference,” Eliza stated.

In conclusion, Eliza called for people to join the campaign and open their minds to the need for change.

“There are loads of people saying the same thing and that is ‘we need to stop’.

“Millions of people are saying the same thing and people need to start listening to us,” she concluded.