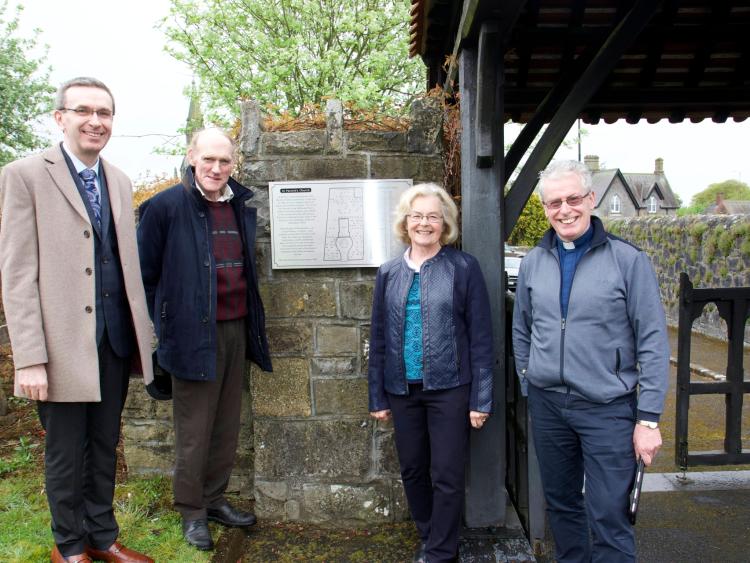 The unveiling of two new plaques at St Patrick’s church in Ardagh and St Mel’s church, also in Ardagh, drew the crowds on Sunday, April 28.

The plaques, which were designed by the team of Grey Wizard design in consultation with Robert English and Laurie Walker of St Patrick’s Church and the County Heritage Officer Maireád Ní Chonghaile, were financed by the Tidy Towns committee with the support of the Longford Council community grant support scheme. Tom Bannon also played a pivotal role.

The idea behind the erection of the plaques came from two Ardagh residents, Dorothy Woodcock and Mary Lyons.

“Dorothy moved here from the UK about twenty years ago and she noticed that the old religious side of the village didn’t have any information around them for tourists or local people. We thought it would be good if there were signs on the walls with some information about the sites,” Mary Lyons told the Leader.

“She then suggested it to the Tidy Towns committee and they were in support of it. We got a lot of help from the Heritage officer, as we were very keen to make sure that we didn’t do anything that would disturb or be out of keeping with the sites.”

After their unveiling, the plaques were blessed by Ms Ruth Galbraith, Church of Ireland Lay Pastor, and Fr Vincent Connaughton, local parish priest. This was followed by a talk from local Archivist and Ardagh native, Martin Morris.

Mary said, “Martin, who is a native of Ardagh, spoke on both of the churches, their history and how they came to be, as well as their significance to the area.”

This was followed by blessings and some refreshments at the local community centre. The plaque at St Patrick’s Church was complete to compliment the work of Luke Baxter, who published a book in 2013 (Our Roots in Stone) in which he translated and indexed each burial stone at the site, which were previously illegible. The plaque also includes a map of the churchyard. The inscriptions were written by Martin Morris.

Also read: 'This is an extreme insult against our community': Dun Áras residents hit out at Longford planning authority

The plaque at the ruins of the St Mel’s church, which is thought to have been built in the 900’s, gives a brief history of the church and the man behind its foundation, St Mel.

“There are three plaques now, one at the old lower churchyard, one at St Patrick's and one at St Mel's.

“We get a lot of visitors in Ardagh and they do wander around these locations. Now when they do, they will be able to get a very good picture of each of the sites. Everyone is welcome to come along and have a look. It is a very scenic location as well,” Mary concluded.