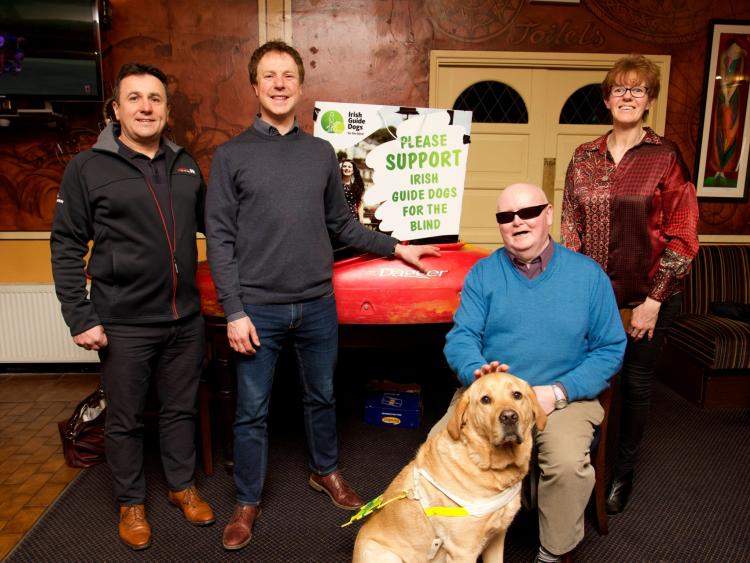 David McCormack with Seamus Murtagh, Jim Heavy with his Dog Yacob and Anne Hartnett-Murtagh at the launch of Route Canal 144 on Saturday night in Clondra PICTURE: MICHELLE GHEE

A 144km journey from Dublin to Longford might seem like a mammoth task to most people, but not to David McCormack and Seamus Murtagh.

The pair have come together to organise a fundraising event entitled, ‘Route Canal 144’, which was officially launched on Saturday, April 13, in McPartland’s, Clondra. The initiative will see them kayak (or run) from Dublin to Clondra. The three-day event will take place in August and any funds raised will go to the Irish Guide Dogs for the Blind.

Seamus explained, “I have been involved in running and triathlons over the years and any money I raised I put towards the Irish Guide Dogs. So I had this idea to Kayak myself from Dublin to Clondra to raise funds for the Irish Guide dogs for the blind.

“I started planning and contacted David, who I know from doing triathlons for many years, and unbeknownst to me, he was putting together the same thing. It was just common sense for us to work together and that is how we got to where we are now.”

David remarked, “I am always doing mad things like this. I am a paddler anyway and I always wanted to do the full distance and I never did.”

Wanting to include as many people as possible in the fundraiser, David and Seamus decided they would also add a running option. People can also participate as part of a team and split the journey between team members.

“We are doing it over the course of three days. 50kms the first day, 50kms the second day and the remaining 44kms the final day. We hope to have at least ten paddlers at least and we hope to have a maximum of twenty runners,” David said.

Seamus added, “Kayaking can be a wonderful way of getting out, getting engaged with the water and really pushing yourself. Even if you haven’t kayaked before, you can still get involved.”

Each participant will receive a sponsorship card, which you can obtain by contacting David on 087 252 4014 or Seamus on 087 195 5991. People can also donate over the course of the three days as there will be bucket collections.

David encouraged anyone looking for overcoming a challenge while helping those less fortunate, to put their name in the ring as soon as possible.

“If people want to go out and have a good time, while doing something for a very worthy cause, then please come along and show your support. It promises to be a great weekend.”

He concluded, “It will be an achievement in itself and a challenge too for people as well.”