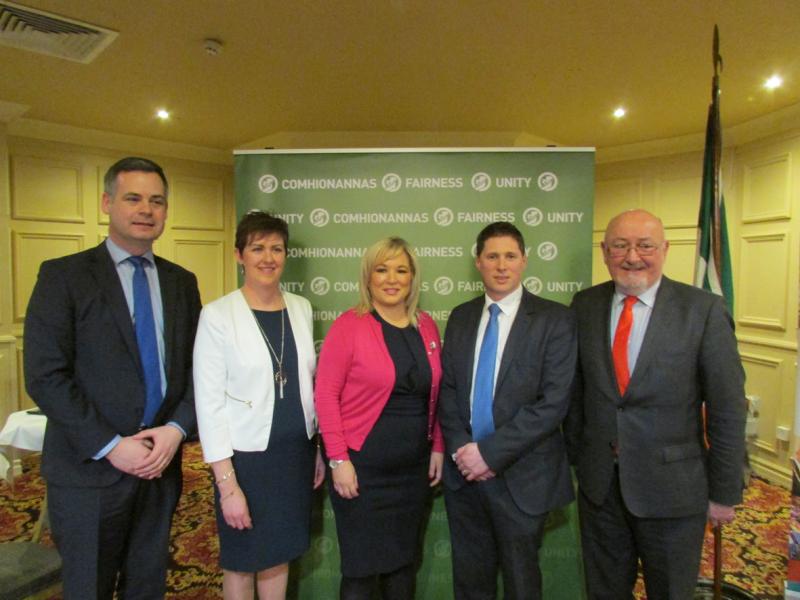 Sinn Féin MEP, Matt Carthy, has said that he wants to, alongside his party colleagues, keep fighting for Ireland in the European Parliament.

He was speaking as he accepted the Sinn Féin nomination to contest the May 24 European Parliament election in the Midlands North West constituency.

Carthy was proposed at the convention, held in the Hotel Kilmore, Cavan, by Cavan Monaghan TD Caoimhghín Ó Caoláin and seconded by Donegal Deputy Pearse Doherty.

Outlining the challenges facing MEPs in the next European Parliament, Carthy cited the proposals for the new EU budget:

“The EU is currently negotiating a new multi-annual budget.  Their proposal is for an increased budget, in which the Irish people contribute more, but which sees reductions for the Common Agriculture Policy and Cohesion funding while pumping billions into the creation of an EU military framework that has almost no support from the people of this country.

“Every vote cast for Sinn Féin on May 24 will be a vote against that type of EU budget."

He said that Brexit will continue to dominate EU politics and there was a need to ensure that an all-Ireland party continued to insert Irish concerns into Brexit negotiations:

“Our efforts have had an undeniable impact on Brexit negotiations. Sinn Féin was the first party to argue for Special Status for the North. Other parties accused us, at that stage, of being naive – now that is essentially the policy of the Irish government and the EU.

“It was the work of Sinn Féin MEPs that ensured that Irish issues, and in particular the issues arising from the partition of our country, were understood by our European counterparts and, in turn, became central to the Brexit negotiations.

“With the potential loss of northern representation in the European Parliament it is essential that we return MEPs from an all-Ireland party that has this proven track record of inserting the all-Ireland agenda into Brexit talks.

“How ironic that those parties who have lectured Sinn Féin on Stormount & Westminster balked at the chance to provide representation for Irish citizens from the north in the place they actually want to be represented – the European Parliament.

“This failure to allocate Irish EU seats to the north is evidence enough as to why we need Sinn Féin MEPs.  As we move closer to a United Ireland, and in recognition that the EU can play an important role in that process, we need unapologetic, unequivocal and committed United Irelanders in the chambers of Brussels and Strasbourg.  Only Sinn Féin MEPs are up for that job."