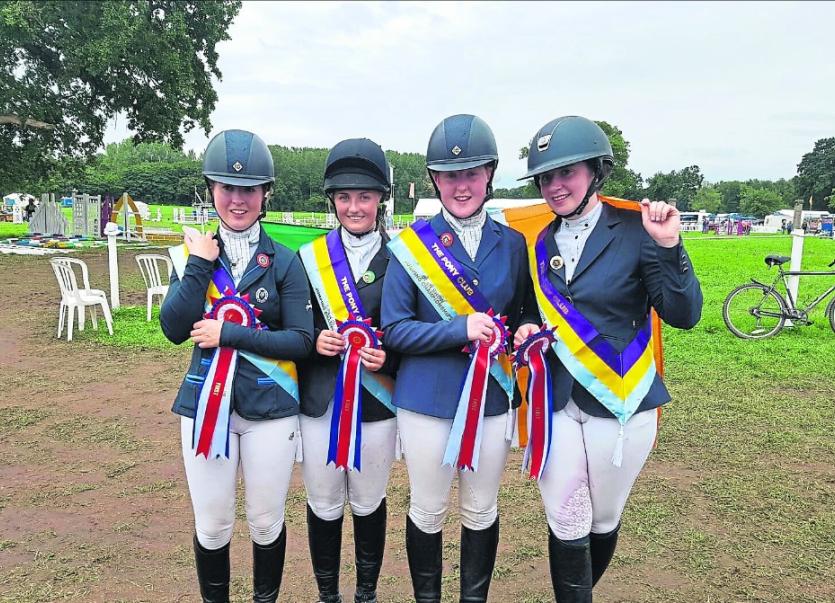 There was a very early start on Sunday morning as Longford were drawn third of the 30 teams in the open championships.
The draw for the second round saw Longford last to jump so there was a long and nerve-wracking wait for the team.

As others accumulated penalties in the second round, it became clear that the course designer had set a very demanding, challenging and technical track.

Rebecca Lyons is the youngest member of the team and has been riding since she was three years of age.
She bought Castlerea Draoi in 2015 and uses the fantastic facilities at Mosstown riding stables to stable and exercise her horse.

Rebecca joined Longford Pony Club in 2015 and this is her first time to represent her club at national and international level. She attends Moyne Community School.

Edel Whyte has just completed her Leaving Certificate in Ballymahon Vocational School, which she has successfully represented at interschools showjumping competitions.

This year, she has campaigned Abel Star, a horse which was bred and produced by the Whyte family.

Rebecca Yorke is an accomplished showjumper, having progressed through the grades from ponies to horses.
She has successfully brought on young ponies and horses to compete at national and international level. Last summer, Rebecca was awarded a bursary for SJI elite training in Cork and was also selected to complete a summer camp at the Longines World Equestrian Academy with the renowned German Showjumpers Thomas Stiller and Ludgar Beerbaum.
At the championships, Rebecca rode her horse La Hof Ter Zeedycke.

Aisling McGreal has been a member of Longford Pony Club since she was seven and has represented the branch in dressage, hunter trials, evening and showjumping.

She was honoured and privileged to be offered the ride of Harold McGahern’s Rincoola Holly Berry for the 2017 Pony Club season.
During 2017, Aisling competed at international shows in Mullingar and Millstreet and competed at the RDS Dublin Horse Show in a small event horse class.