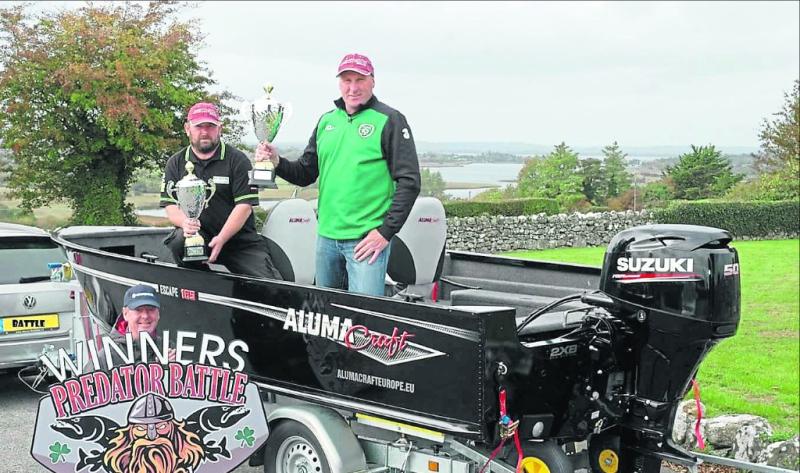 Longford fisherman Joe McDermott (right) proudly shows off his and teammate Pat Healy's accolades whilst trying out their new €26,000 boat for size following their win at the Predator Battle Ireland a

It was a red letter day for Longford fishing supremo Joe McDermott recently as he and fellow angling companion Pat Healy swept all before them at the Predator Battle Ireland competition on the shores of Lough Derg.

The pair stormed to victory at what is Europe's premier open annual tournament for fishing enthusiasts.
Joe, whose other claim to fame came last Sunday when taking charge of the County Minor Final between Carrick Sarsfields/Kenagh and Killoe, has been casting his rod for the best part of 40 years.

And while winning trophies and admiring glances from his fishing peers is nothing new to the Clonterm man, the adulation which greeted the pair's latest success was especially gratifying.

“We won an Alumna Craft engine boat and trailer which is valued at around €26,000 which was great because it (Predator Championships) is the top event in Europe for that type of competition,” said a clearly thrilled Joe this week.

The avid fisherman, who is gearing up for another celebration later this month in the form of his 50th birthday, explained how he and Pat managed to see off almost 40 other teams on their way to claiming the top prize.
“It's all based on length,” remarked Joe.

Given his and Pat's lengthy achievements to date, which include competition victories right across the country, it's perhaps not hard to see why the duo have made a successful living out of it.

They also managed to finish top of the pile at the Lough Ree World Cup three times in just four years.

This Sunday the all conquering fishing double act head to Lough Erne in Enniskillen looking to reclaim their crown after finishing in the runners-up spot last year.

“Ah yeah, we will be going trying to do that (finish first),” said a humble sounding Joe.
“Sure, if we get a prize we will be happy enough.”

Given their recent tournament topping exploits, you wouldn't bet against the pair returning from Fermanagh with yet another accolade to add to their already renowned reputations.