Longford Men's Shed delighted to move into their new home 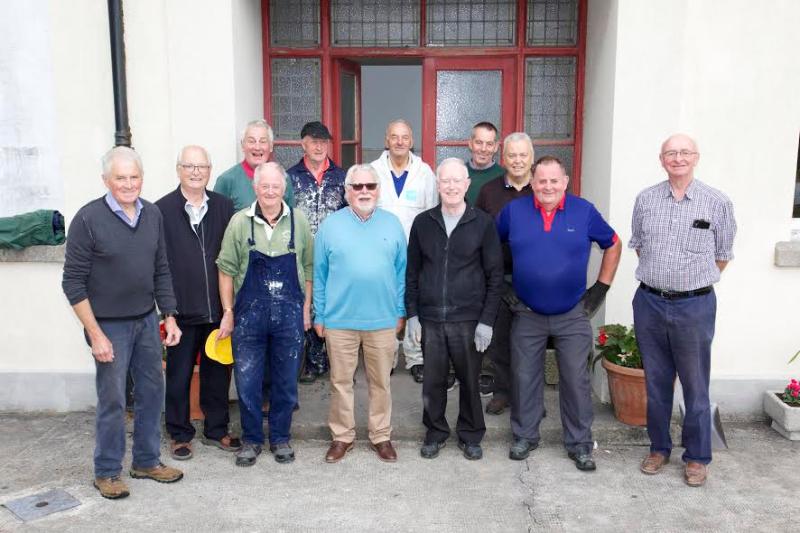 Longford Town is now fortunate enough to boast its own Men’s Shed.

For those unfamiliar with the concept, a ‘Men’s Shed’ is a community-based, non-commercial organisation whose aim is to provide a friendly, safe, healthy and inclusive environment open to all men.

Here, they are able to gather and/or work on an abundance of creative and meaningful projects in their own time, and in the company of other men, where the main goal is to advance the overall well-being of the club members.

Funding for the Longford Town Men’s Shed was generously given by various donations from businesses including Providers Longford and Top Line.

Longford County Council also provided financial aid for the project.
Organisers of the club had previously set up a table quiz night in order to raise funds, and they hope to do so again in the near future.

The Longford Town Men’s Shed is newly situated in the old nun’s house, at St Mel’s College. Previous to their move, the club struggled with finding suitable premises for the organisation.

The Leader visited the new ‘shed’ to see their progress, and to find out more about what it means to be a part of the Men’s Shed.

Speaking of their past struggle with finding a suitable building for the club, Assistant Secretary Pat Chapman explained, “We used to be in a rented property at the rear of the post office for 2 years paying weekly rent but it was ruining our ambitions because we were spending so much money on rental alone.

“Everything we did we had to clamber for funds. Last year we had a table quiz just to raise a few pound but what were we doing, spending it on rent.”

Thanks to the generosity of the St Mel’s Diocesan Trust, and the Board of management of St Mel’s College, the Men’s Shed have been given the astonishingly beautiful old nun’s accommodation house.

Mr Chapman pointed out, “Generally if you look around the other counties you’ll find that the majority of Men’s Sheds have been donated a premises or have been allocated one, so we started looking for a place and the Diocesan Trust and The Board of management of St Mel’s College kindly decided to give us this building.

“It’s a premises that hasn’t been used for 20 or 30 years so it has run into decay and was vandalised at different times but, do you know that’s what having a men’s shed is all about, having a project to work on.”
Refurbishments began two weeks ago and the progress the men have already made is astounding.

With beautiful, authentic sash windows lining the freshly painted walls, and ornate flower pots framing the building’s exterior, it’s well on its way to completion, but there’s still more to be done on the interior.

The Men’s Shed aims to contribute massively to the community in the near future, and has done so in the past with projects around the town. PRO Brian McCormack highlighted some past successes.

“We’ve been doing little chores for the tidy towns. The tidy towns has a set of rubbish bins around town which are absolutely beautiful stainless steel bins with green and gold lettering and they’ve run into decay so we took on the task of fixing them.

“The Longford Golf Club have signs on every tea box and around the course that are a bit worse for wear so we took on that project too of cleaning and tidying up them too.

“The men have spent hours and hours over winter sanding them, re-varnishing them and we’re delighted with them,” he proudly told the Leader.
The organisation has also helped the community with projects for the County Council, and hope to join forces with Transition Year students from Mean Scoil Mhuire, St Mel’s and the Templemichael College in the near future.

Plans for the new building are well and truly underway.

Mr McCormack revealed some of the organisation's hopes for the new premises, stating that “eventually we will have different training rooms here; certainly we’re going to have a computer room here, because in talking to older men, some of them have never become IT literate, and even just to send an e-mail is a problem in some cases, so we're going to ensure they can develop those skills here.”

He added, “Computers have very generously been donated to us by the Longford Local Enterprise Office where they were changing theirs. We’re going to have a woodwork room, a fitness room and many more training rooms with a very serious element aimed towards well-being.”

Positive mental health is a huge factor in the organisation's objective.

The motto of the official Men’s Shed organisation is “Men don’t talk face to face; they talk shoulder to shoulder”, and it is often this simple insight that resonates most with people when they first hear about Men’s Sheds and are wondering why Men’s Sheds work.

Longford Town Men’s Shed tackles issues such as mental health by providing an outlet to focus on.

However, keeping busy is only half the battle.

“There’s a big emphasis on positive mental health, just to have someone come in and talk to the people that might be struggling with whatever it is, is so important for a community like this.”