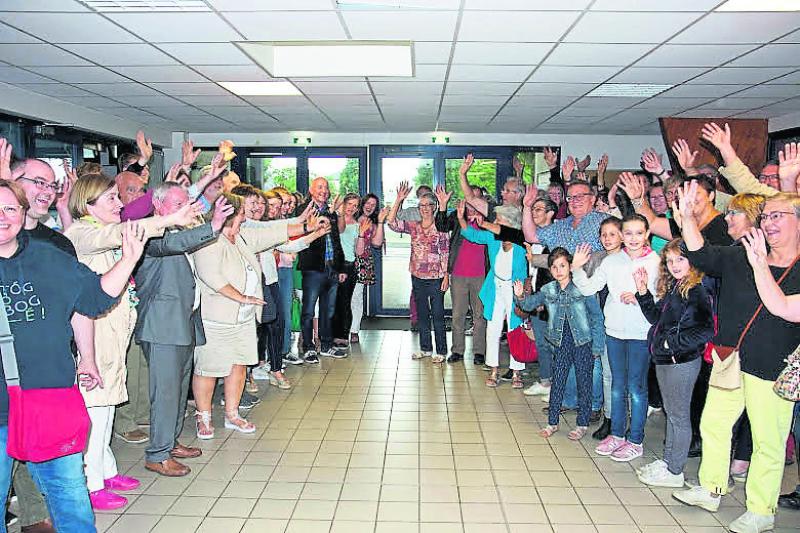 The Longfordians arrive at the local hall where they are met by the residents and host families of Noyal Chatillon sur seiche. Photo: Michelle Ghee.

A contingent of 26 Longfordians descended on Noyal Châtillon sur seiche in Britanny to celebrate the 20th anniversary of the twinning (jumelage) between it and Longford town last week - and what a celebration it was!

From the French cuisine, local hospitality and the music and song provided by Co Longford musicians Full Swing, singers Aine McLoughlin and Aoife Mulligan, French musicans and Irish dancers, to the sunshine, local legends that included King Arthur and the Knights of the Round Table, Merlin the Magician and The Lady of Shalott, and les parties, it will be without doubt a trip that will go down in history for the French and Irish alike.

And speaking of history, while there have been many visits made by residents of Noyal Châtillon sur seiche to Longford and vice versa, this particular trip was made all the more special by the historic 20th anniversary.

In fact, local area representative in Longford town, Cllr Peggy Nolan - who was also part of the delegation - summed the friendship between the two towns up very aptly at the official celebration in the town hall on Friday evening when she pointed out that being part of it all was “a privilege”.

Cllr Nolan also brought laughter to proceedings when she put the Longford delegation’s much appreciated translator - Cnoc Mhuire teacher Pauric Hanlon - to the test during her speech - but true to form Mr Hanlon came up trumps!

“Looking around this hall this evening I see nothing but friends,” smiled Cllr Nolan.

“20 years is a generation and for 20 years this jumelage has given us an understanding of Brittany’s culture and a deep, deep friendship with each other.

“This year is also the 20th anniversary of my becoming a councillor and in those 20 years my family married; I am now a grandmother and I have seen my town grow.

“Now I come here to what was two tiny villages separated by the Seiche river, now joined together, and all of you should be very proud.

“The community here is wonderful and to see now for myself the building of infrastructure to accommodate the next generation is something that is so, so special and so fantastic.”

Mayor, Noyal Châtillon sur seiche Gilles de Bel Air then told those gathered that the twinning programme was initiated to bring people closer together “in order to avoid new wars”.

“The twinning with Longford is the first official twinning with a foreign country; it allows us to bring our populations closer together and consolidate our friendship since we have never waged war on Ireland except perhaps in rugby and football!”.

On the night Longford people involved in the twinning over the years who have now passed away were also remembered.

Those called to mind included Michael and Eilis Killeen and Mary Farrell from Ardagh.

“This is a wonderful occasion for all of us and important for our two countries - here’s to another 20 years,” he concluded.