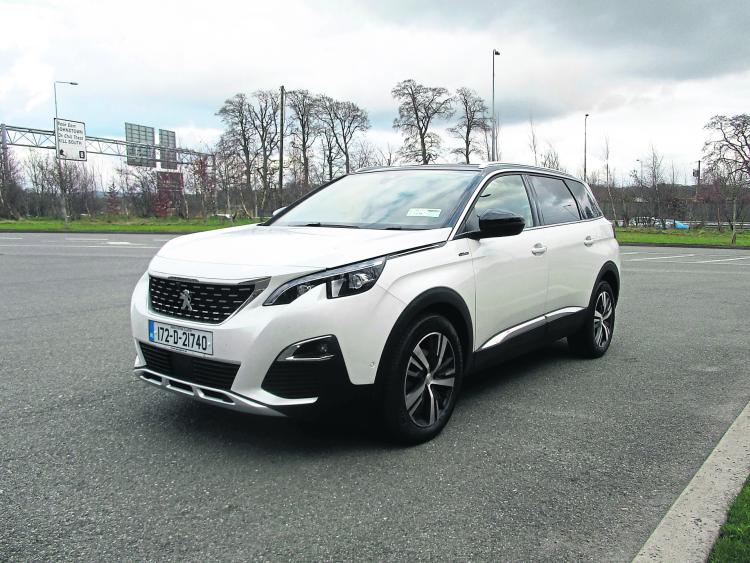 The Peugeot 5008 ticks all the right boxes for SUV lovers.

The market is ravenous for SUVs with MPVs out of favour, and here they are with two of the best lookers around.

And in a market where women have a big say in buying, don’t tell me looks don’t count.

They do, and I am with the ladies on this one because, we ask you, who wants to drive a car that is visually unattractive for three, four or more years?

Not me, thank you!The 3008 SUV was a smash hit when it arrived. Now its bigger brother, the 5008 SUV which shares a lot of equipment, technology and so on with its smaller brother and offers a third row of seats, is proving so popular it is eating into the market of its sibling, apparently.

The 7-seater SUV has magnetic appeal, and Peugeot are at a stretch to keep up with demand in Europe and here in Ireland.

We can understand that. The first time we lay eyes on a 5008 it was passing on the M9.

It immediately grabbed our attention with its Land Rover-like rear end. We raced after it for a close up view.

The comfortable, wrap around front seats set the tone for what has to be classed as a high end interior in which quality materials are used throughout.

This is a spacious family car. Most will have read about or heard before the debate about a 7-seater, whether the two small third row seats are of much use or whatever.

When they are folded your boot is decent. When not, it is small. Versatility is the name of the game here.

We went the whole hog and folded them all one day (2,150 litres of space) for a trip to the Recycling Centre.

We mentioned the seating, and the pilot’s perch is top notch.

A lovely to fell and use small steering wheel that doesn’t cut across your vision of the dials in front of you, adds in a simple, almost unnoticeable way to the ease of drive with controls within easy reach.

Nowadays a driver can have so much information in front of him/her the tendency can be to ignore most of it.

On the 5008 you can minimise the visuals, and keep the information flow to what you want; maybe fuel range, rate of usage or whatever.

Our drive was in the 1.6-litre HDi diesel. We won’t labour the point.

The unit is well up to the job in every sense; strong and versatile in terms of the drive.

The economy of drive is impressive (see The Car section), but don't expect the fuel returns quoted by the manufacturer; good enough, but a bit behind those suggested.

There was a composed feel to the 5008 on the road, and while it is a big bodied car, it was easy to manoeuvre and put about.

Of course you have the help of technology when parking.

The sharpness of style on the 5008 was reflected in one unusual feature.

It was the light from underneath the wing mirrors which reflected the Peugeot insignia on to the ground while at the same time lighting a path to your front door.

A lovely finishing touch from a lovely car!