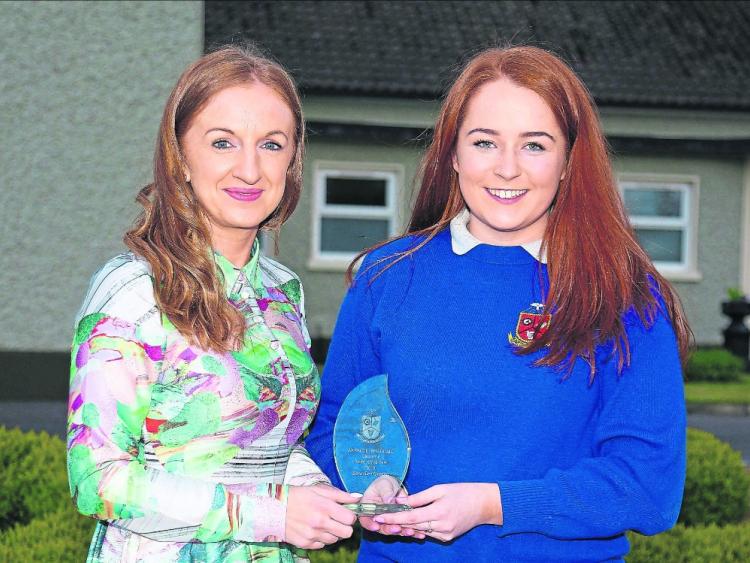 Cunningham and Niall Moran who were joint winners of Senior Student of the Year and were presented with their awards by Ms Marie Scanlon, Granard Credit Union.

The other very worthy nominees for this award were Sara Lee Greene and Conor Masterson.

Congratulations also to Kaitlyn Corcoran who was presented with Junior Student of the Year award by Ms Maura Kilbride Harkin, Chairperson of the Board of Management.

The other very well deserved nominations for this award were Abagh Harten, Tommie Cunningham, Jack D’Arcy and James McCormack.

The perpetual Gerry Brady Memorial Shield for Senior Student of the Year was presented by Paraic Brady to Laura Cunningham and Niall Moran.

Awards for excellent project work were given to Niall Moran for Engineering and DCG, Evan Tully for Construction, Sara Lee Greene for Geography, Lorraine Flood for Home Economics, Joey Kiernan for Metalwork and Logan O’Reilly for Materials Technology (Wood).

The Irish Scholarship was presented to Sophie Flynn while Jack D’Arcy received the French scholarship. Haidee Temple received the Performing Arts student of the year trophy.

Certificates were also presented to the Pupil Voice representatives, the French Quiz team, Junk Kouture participants and to students who had 100% attendance.

Brad Flynn and Patrick Reilly received certificates acknowledging their qualification to the National BT Young Scientists of the Year finals and also on becoming third in the recent SciFest competition in Sligo IT.

Students who qualified to represent County Longford at the National Student Enterprise Finals were also presented with their trophy.

Also on the evening the Gaelbhratach flag and the Global Passport Award was presented to student representatives.
Success in sport was also celebrated with medals being presented to the First Year Girls Basketball team who reached the finals of the Midland League and also to the girls who won the Longford Post Primary 15 a side Football blitz during the year.
Special mention was made of Funmi Talabi who earlier that day had qualified for the All Ireland Schools Athletics Final in the 100 metres.

Mr Buckley congratulated all award winners and commended them on their participation in school life, both inside the classroom and outside. Also see Page 44.