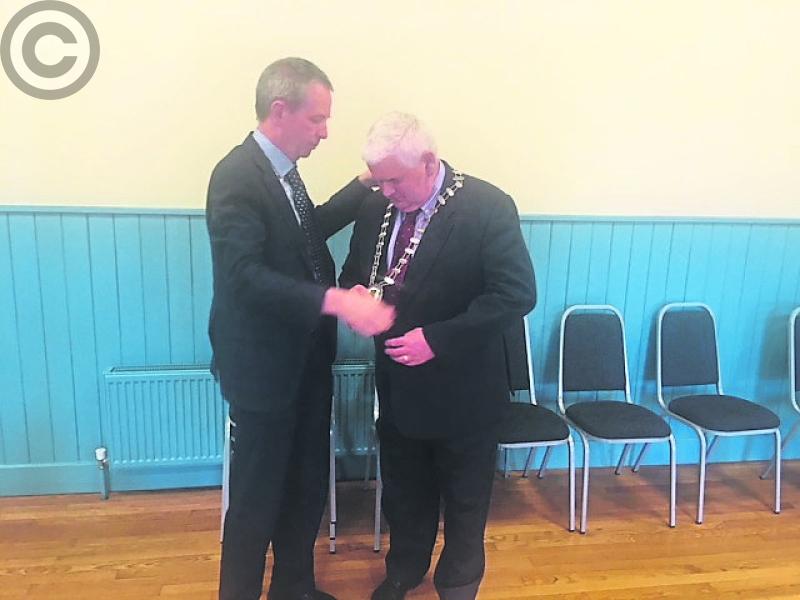 Cllr Reilly is presented with the chain of office by John Brannigan.

Cllr PJ Reilly (FF) was elected Cathaoirleach of Granard Municipal District for the second year in succession during a meeting of the District earlier this week.

Cllr Reilly thanked those gathered for their support and help throughout the last year and highlighted a number of projects to be completed during his new term.

He also pointed to the fact that there was lots more work to be done!
“Granard Municipal District has had a good year and we have achieved what we wanted for out area,” he added.

“I am delighted with the opening of the Buttermarket and there was a lot of work carried out at Higginstown which was great.

“I was particularly happy to see the works being carried out at Dring Carpark and the toilets have been reopened there.”

The re-elected Cathaoirleach also pointed to a number of “very positive” Local Improvement Schemes (LIS) that were carried out in the District over the last 12 months.

“A lot of those were carried out in the Dromard, Drumlish, Colmcille area and they have been vital in the improvement of roads and laneways across north Longford,” Cllr Reilly added, before pointing out that the works also served to enhance the lives of those living in the locality.

“The Motte Interpretative Centre is ready to open now - this is very important to the town of Granard and will be a tourism and economic boost in the area.

“We are also in discussions with the landowner of where the Motte stands and are focused on ensuring that it comes back into the public domain.”

Meanwhile, the Abbeylara native went on to say that there was plenty to focus on too in the coming year including plans to refurbish houses in Colmcille Terrace and the building of nine Old People’s Dwellings (OPD) close to the site of the former Ulster Bank.

“17 houses in that vicinity will also be completed as well; these are developments where the foundations were already in and will now be finished out,” Cllr Reilly continued.

“A road will be opened up between the Ulster Bank and the Garda Station and that will help to alleviate some of the traffic coming through the town.

“We also have a serious problem with car parking on main street and I would be confident that will be addressed shortly.”

He also spoke about the anticipated works on homes in Colmcille Terrace and Redmond Terrace on the north side of the town.

“The residents in those areas have been waiting along time now for refurbishment works and we are very hopeful of progress being made there,” the Cathaoirleach continued, before pointing out that district members expected works to begin sooner rather than later.

“These are houses that would have been built in the 1940s and so they require a certain amount of maintenance and repair works carried out on them.

“There has been no maintenance of these houses since they were refurbished about 25 years ago.

“At the moment there is 12 vacant houses there and it is these properties that the money will be spent on; these houses have been closed up for a long number of years.”

“We have purchased land on Barrack Street, but there are issues with the transfer so it will take a while for that to go through, but when that happens a car parking facility will be provided for.”