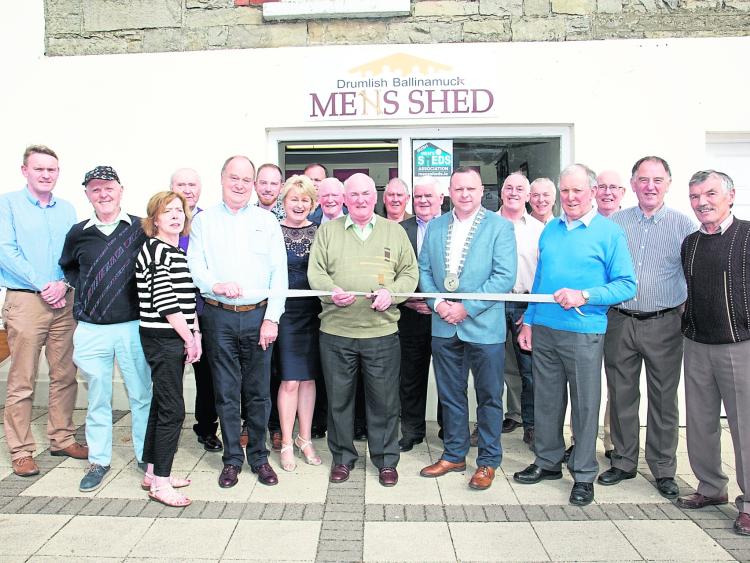 “The willingness of the all the men to work together and draw the strengths from each other and share their talents and skills to bring all of this to realisation has been inspiring".

These were the sentiments expressed by Coordinator of the Drumlish Ballinamuck Men’s Shed, Breda Murphy during its official opening last Friday evening.

Ms Murphy also spoke about the eight month journey she and the local men took together to get to this point and said it had been both inspirational and uplifting for everyone involved.

“I have been working with a group of men who have been full of dedication, enthusiasm, commitment, humour and wit,” she smiled, before pointing out that those qualities were what the Men’s Shed initiative was all about.

Meanwhile, Ms Murphy has worked with the north Longford Men’s Shed for the past 12 years and it’s the experience gained and knowledge gathered from that which has enabled her to bring the Drumlish Ballinamuck Men’s Shed to fruition.

“They are the men that have put me on the straight and narrow in relation to all of this,” she continued.

“We travelled many roads together and had fun times and sad times, and as the saying goes in the Men’s Sheds ‘We stood shoulder to shoulder’.
“I have been passionate about getting this initiative into Drumlish for a long time now and in all honesty this was my third attempt to get it up and running here.”

Years in the Making

Those gathered heard that the coordinator first tried to get the Shed established in the area 10 years ago but the initiative as a whole was still relatively new and her plans failed to come to fruition at the time.

She then tried again in 2013 but the impact of the recession was still being felt nationally and funding for projects was very limited.

“Two years ago the men approached me again to see if it could work and I promised them that if they stood by me that I would cross the line with them,” Ms Murphy added.

“And fair play guys because we crossed that line today and it is onwards and upwards from here.”