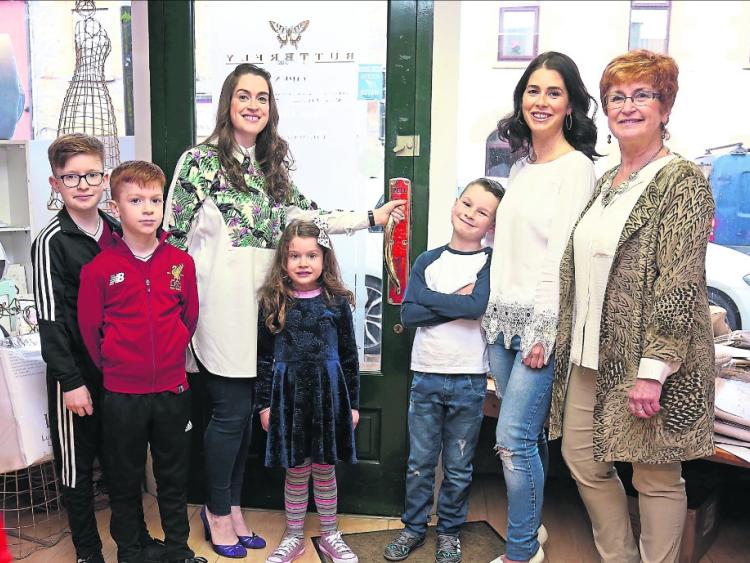 It was certainly the end of an era on Dublin Street last Saturday week when Butterfly Fabrics closed its doors for the last time after nearly 30 years trading in Longford town.

Barbara Keogh has been at the helm of the store’s 29 year reign and both she and the business became well-known and highly respected in the years since the shop’s inception back in 1989.

She says that while there are a number of factors that contributed to the closure of her business, the downturn in the construction industry was by far the most detrimental.

The Longford business woman also believes that Longford town is on the up after what has been a challenging few years for businesses.
“Dublin Street was a great trading street with great shops,” smiled Barbara speaking to the Leader.

“I think that the town is on the turn now; with the new Omniplex, PV Fallons opening up again and the Annaly Hotel opening there is great potential, so hopefully trading will continue in Longford.”

Meanwhile, Butterfly Fabrics emerged from humble beginnings having started out providing a sewing service, material and haberdashery.
As the times changed, so too did the business and the store became the go-to place for curtains, blinds and other modern state of the art interior furnishings.

“The curtains and blinds really became the main end of the business and throughout the tiger years we were very busy - that was a great time for business,” Barbara continued.
“Then the business just went, almost overnight - the economy went into recession and there was no more houses being built.”

Barbara says that as the years went by, she often considered that business couldn’t get any worse than it had been the previous year, but she soon found, unfortunately, she was wrong about that.

“It actually kept going down, but we didn’t really bottom out until last year,” she added.
“Internet shopping definitely impacted us as well and these days young people have different priorities too.

“Everyone is out working and then childcare - which is expensive - has to be paid for, so money is going in a lot of different directions now.
“A lot of people don’t put the money into their window dressings like they used to and then ready made curtains have taken over.”

And, while Butterfly Fabrics began stocking ready made curtains to meet the new demand, Barbara says there was always something more cheap and cheerful elsewhere.
“It was tough competition, we held our own I suppose - I jiggled things about, tried different things over the course of the years to try and compensate for the loss brought about by houses not being built, but I got tired.

“For the past seven years I was there on my own as well and it was lonely at times to be honest with you.

“Even though people were coming in and out I had nobody to bounce ideas off or make suggestions about what to do next, and I found that tough.”
At the moment the Longford businesswoman is clearing out the premises on Dublin Street to make way for a brand new enterprise that will open its doors shortly.

She remained tight lipped on what type of business was moving in.
“It’s not for me to say,” she smiled, before indicating that when the shop was sorted out, she was going to spend some of her new found freedom relaxing and spending time with her little grandchildren.

“I’m going to take a long deep breath now and hopefully have the time to myself and do the things that I didn’t have time to do before.

“I have four grandchildren and they all live locally, so I would like to give them a little more of my time too.”