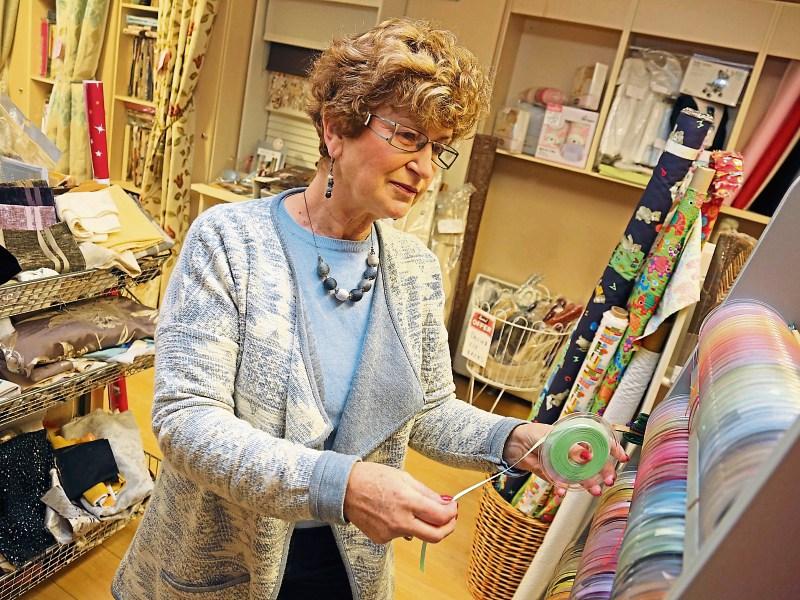 It’s been somewhat of an institution on Longford’s Dublin Street for almost three decades, but after 28 years of trading, Butterfly Interiors & Fabrics will close its doors in 2017.

The one-stop-shop for dressmaking, sewing and haberdashery needs, Butterfly came out of its cocoon in the midst of a recession, steered by Teffia Park native Bairbre Keogh (née O’Connell).

Being a business owner was not always her plan, however.

A past pupil of St Joseph’s National School and the nearby Convent of Mercy, Bairbre went on to spend a year in England teaching. Two years at the Housing Department in Jervis Street in Dublin followed, after which Bairbre got engaged and returned home to Longford.

Married in 1976, it was little over a decade later, in 1989, that the idea for Butterfly Interiors & Fabrics came to fruition.

“My husband at the time, Donald, lost his job. He was working in Hanlon’s Ambulance Factory and it closed,” Bairbre recalled.

Though she had done some sewing and knitting in her spare time, and her late mother, Lily O’Connell was gifted at sewing, the necessity was what drove Bairbre to open the shop.

“It was like ‘what does the town need?’, you know? So I saw an opening for a shop like this,” she explained.

“Well, the shop that started wasn’t exactly like it is now but there was an opening for something to do with sewing.”

Through 28 years and two recessions, Butterfly Interiors & Fabrics kept moving and changing with the times, providing new services, fabrics and products as they came into demand.

“We started off selling fabric for dressmakers and haberdashery and school supplies,” Bairbre continued. “We would have built our range of what we did up quite a bit.

“We carry most of the essentials now. There was another shop in town doing all the craft things so I didn’t really get into the craft end, I stayed with the basic sewing and dressmaking.

“We supplied the schools over the years,” Bairbre added. “We had all the school children coming in several times a year, and a lot of the craft classes and people learning to sew have been in and out through the years.

“We also branched out into curtains. We did some to begin with. At that time there wasn’t ready-made curtains, they were all made-to-measure so we did a huge business in that.

“From there we continued on with some soft furnishings. We would have done pelmets, tie-backs, cushions… we sewed blinds over the years too, we had a great turnover in window blinds of all sorts.”

In fact, Bairbre believes that Butterfly has great potential to keep moving with the times, and the property is available for lease or franchise, which opens the opportunity for an enthusiastic person to take the reins of this well-established company.

“I would have loved if somebody had been interested to come in and take it on and bring it into the next decade, definitely. I would see great potential, which I think is very important.

“There is great potential for new blood in here. My own family have done their own things, none of them were interested, but I do feel if the shop were to go online, which I’m not prepared or equipped to do, the work is done here and the base is here and it’s a shame that there’s nobody interested.”

Laughing that she had gone into business “as green as they come”, Bairbre acknowledged that she learned plenty along the way and had some advice to share with budding entrepreneurs and business owners.

“Business is tough,” she admitted.

“There’s a lot to be said for a secure salary or wage at the end of a week. It’s not easy.

“So anyone who would be thinking about going into any business, you need to be really focused.”

It’s with great regret that Bairbre is leaving Butterfly Interiors & Fabrics, and her fondest memories of the past 28 years are undoubtedly of the people she has met.

“We have a great customer base. The kids who were coming in with their mammies to begin with are coming in now,” she smiled.

“I made great friends through here and in all the businesses I’ve been dealing with - a lot of them from the very beginning.”

Offering sincere gratitude to her loyal customers, Bairbre reserved special praise for those who worked in the store alongside her, in various different capacities.

Now, looking towards her future, Bairbre certainly won’t forget her professional past, and it’s with a heavy heart and plenty of memories that she will close the doors for the final time this year.

“It was more than just a shop, it was a home from home,” Bairbre added fondly.

“It was where the family came and it was a meeting place for my children and their friends and for my friends and family.

“It was definitely more than just a shop.”