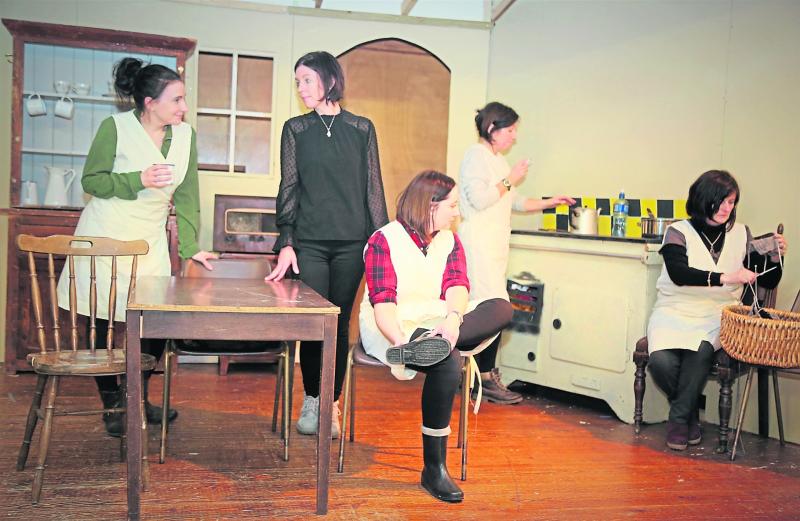 Killoe Yew Tree Players are delighted to present their first production of 2018 in Ennybegs Community Centre on Saturday, Sunday and Monday nights, 24, 25 and 26 March respectively.

'Dancing at Lunasa' is a brilliant Brian Friel classic and provides a glimpse into the life of a family in rural Ireland in 1936 and depicts Irish society as it was then from the social, economic, political and religious perspective.

People in those days, including the Mundy family, lived a sparse hand to mouth existence but life was not without its humour and music and this is displayed through the characters of this play.

The characters are multi-layered and Brian Friel has skilfully woven back-stories, personality characteristics, hopes, dreams, issues into every one of them until we see each one of those individuals as living breathing persons whom we know personally and with whom we identify and empathise.

The family, though poor, are not too badly off as they have Kate, who is a teacher with a regular income but this income has to support five adults and a small child, not to mention providing extra comforts to their pride and joy, Father Jack, who has worked on the Ugandan missions for over 20 years and who has recently returned to the Mundy family home, somewhat in disgrace, and in poor health.

Paul McCarthy as Michael plays both narrator and his seven-year-old self as he looks back on a period of his life which stands out in his memory for reasons which will be dealt with in the play.

Kate, is played by Sharon Finneran, and as her character is the breadwinner of the family she bears most of the responsibility for the household, which is not only to feed and clothe them but to maintain their standing in the community!

Damien Bennett has taken on the role of the gentle and arguably misguided Father Jack, whose arrival home to Ballybeg was not the triumphant return that his devoted sisters would have wished for and results in many unforeseen and life changing problems for his family.

Maggie, played by Carmel Kennedy, is the joker of the family and she acts as a buffer between Kate and the other sisters by diffusing the typical family tensions that arise among them and she hides her problems and regrets behind a jolly and cheerful façade.

Mairead Moorhead is Agnes, who is the quiet and undemanding sister, but she harbours both sadness and resentment against her role in life and is able to stand her corner when required!

The lovable but vulnerable Rose is portrayed by Joanne Dunne, who is one of our newest members in our drama group and she creates more than her fair share of trouble within the family!

Chris is played by Grainne Fox Sheridan and she of all the sisters is possibly more fulfilled in her life as she has a child and a relationship (of sorts) but she too rails against the confines of her narrow existence.
Our newest member, Sean Rooney, has taken on the role of the feckless but charming Welsh man, who is Michael’s father and Chris’s lover, albeit on a very occasional basis.

'Dancing at Lunasa' is a great play and a lot of people have worked very hard and given us a lot of support in bringing it to our audiences in Ennybegs.

Not least of those are Michael Kenny who designed our set, his able team of set builders and decorators, Colm Hughes, Sean Sorohan, Eugene Murphy and John Doherty.

Costumes were provided by Yvonne Bennet, sound and lighting are provided by James Kennedy and Eamonn Keogh, continuity by Julie Murphy and Emily McCarthy, prop and stage management by Ronan McGoldrick and Nicole Rowley and make up by Ann Ita Bratten and Yvonne Bennett.

We are also indebted to all those people, too numerous to mention, who loaned us props, to Laura Doherty who designed our posters and programmes, Donna Sorohan, who helped out with the Donegal accent, of which she is an expert, and Ned Heslin, who provided valuable guidance in ballroom dancing!

We hope that you will come to see our production of Dancing at Lunasa, which incidentally marks our thirtieth year in existence as a Drama Group.
Booking lines open Wednesday, 14 March 2018. Contact number: 087-2911994.