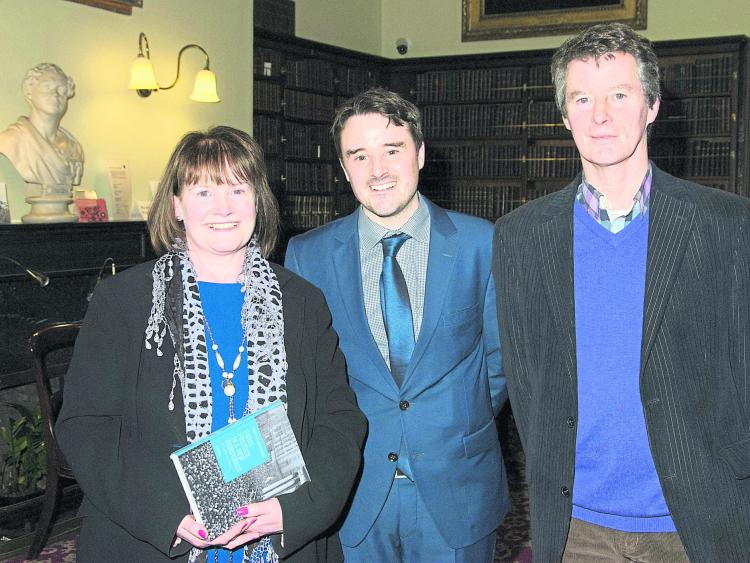 Dr Mel Farrell with his parents Anne and Pat Farrell.

The book was launched by Stephen Collins, Political Correspondent with the Irish Times, at the Royal Irish Academy Dublin on Thursday, February 8 last.

In the publication, Dr Farrell combines an insightful account of the evolution of contemporary political democracy in Ireland by tracing the evolution of Fine Gael and Fianna Fáil during the fifteen years that followed the Treaty Split.

In fact Dr Farrell even goes so far as to suggest; “more than the 1921 peace settlement has separated these two political beasts”.
The book also addresses the context of the development of a stable Irish Democracy at a time when parliamentary politics was in retreat across Europe.

In just eight chapters, the author sets out all the issues from the Revolution to Statehood, 1919-1927 to Stable Democracy, 1927 -1937 with a detailed analysis of the emergence of its two main political parties, Fine Gael and Fianna Fáil: Common Origins, Separate Identities?

He argues that the Irish Party system was not unique in having two dominant parties capable of adapting to changing circumstances, and suggests that this has been a key strength of Irish Democracy.
Meanwhile, Dr Farrell grew up in Ardagh and during the 1990s and 2000s observed that “local and general elections were always dominated by Fine Gael and Fianna Fáil.”

“From a young age there did not appear to be any other parties; it was a small community, and each side had their local stalwarts operating the party machinery when required - this fascinated me,” he added.

For Longford historians, ‘Party Politics in a New Democracy, the Irish Free State 1922 – 1937’ is a book that will become a very interesting and informative read.

He was also formerly a Government of Ireland Scholar, 2009-11 and has published numerous articles in such journals as Eire –Ireland and New Hibernian Review.

‘Party Politics in a New Democracy, the Irish Free State 1922-1937’ is available from the UCD Bookshop or to order from all good bookshops.