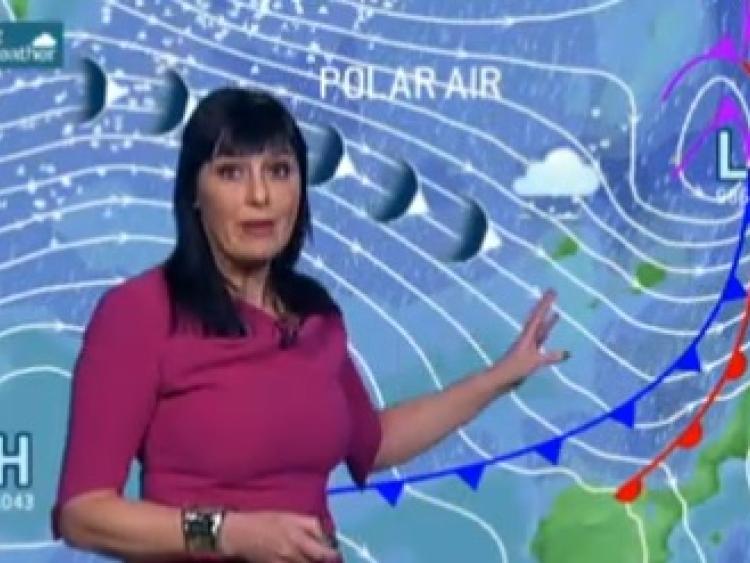 Snow, ice long sunny spells feature in Sunday's weather as a Met Éireann warning remains in force with the polar front set to dominate until Tuesday.

The forecaster says there will be sunny spells and widespread snow and sleet showers today. It says some of the showers will be heavy with hail and thunder also.

Accumulations of snow are expected, especially over high ground in the north and west of Ireland. A Met Éireann Status Yellow Weather Warning remains in force until 11.59 Sunday.

The showers will be more isolated in east Leinster with long sunny spells here. Cold with highest afternoon temperatures just 1 to 4 degrees generally. Winds will be strong and gusty, west or northwest in direction.

Brace yourself folks.....Weather warnings in place for Longford as strong winds, snow and ice are predicted

Meanwhile, there will be further wintry showers overnight Sunday / Monday but they will become less frequent in the east and southeast. Cold and frosty despite the strong westerly breeze with lowest temperatures ranging -2 to +1 degrees.

There will be sunny spells and scattered showers on Monday morning. The showers will become isolated in the afternoon and fair weather will develop for a time. Temperatures in the afternoon will range between 4 and 7 degrees. Winds will be mainly moderate southwest in the morning, but will increase strong and back southerly during the afternoon and early evening as heavy rain arrives along the west coast. The rain will extend eastwards during the evening.

Rain, sleet and snow will continue to spread eastwards through Monday night. It will clear overnight with sleet and snow showers following on to western and northern coastal areas. Winds will gradually moderate and veer from the southwest to west with the clearing rain. Icy stretches will form on untreated roads and footpaths as temperatures fall to between minus 1 and minus 3 degrees.

Tuesday will be cold with good sunny spells and scattered wintry showers in the west and north. Highest temperatures of 2 to 5 degrees with moderate westerly breezes.

On Tuesday night, frost and ice will develop for a time, but winds will back southeasterly and become strong as another band of rain and snow spreads from the west overnight. Lowest temperatures minus 1 to plus 2 degrees but becoming milder by dawn.

Wednesday morning will be wet with rain and sleet, heavy for a time. Sunny spells and scattered wintry showers will follow, the showers once again mostly affecting the west and north coasts. Winds will be fresh to strong from the southwest making it feel cold, although temperatures will recover to between 6 and 8 degrees in the north, and between 9 and 11 degrees in the south.

Thursday and Friday will both be cold with sunny spells and scattered showers. Sharp or severe frost and icy patches will develop at night and winds will be fresh to strong and gusty southwesterly.

Temperatures will recover temporarily over the weekend but it will remain unsettled with rain at times.

Nationwide Snow and ice warning as temperatures to drop to -3C
overnight. Motorists and parents on the school run are advised to allow extra
time tomorrow morning re possible hazardous conditions on roads and footpaths. #ArriveAlive @RSAIreland pic.twitter.com/2ESVWn6Dzl