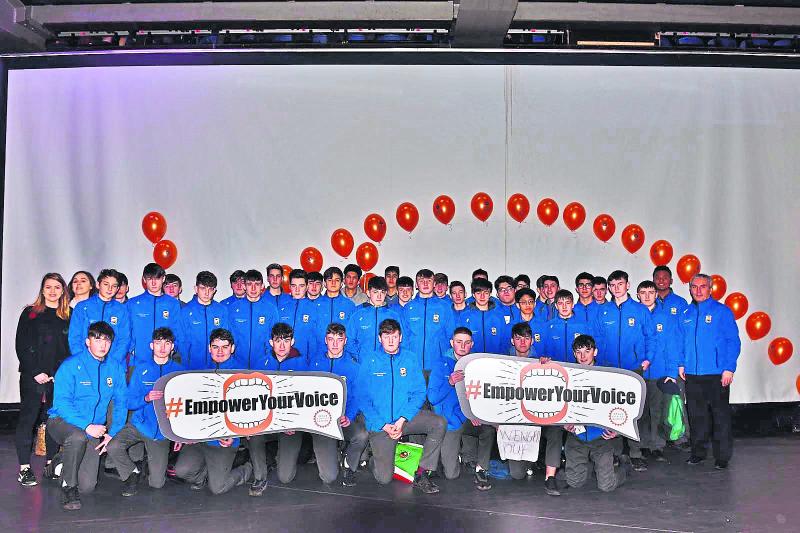 On January 18 the TY students of St. Mel's College, Longford, hopped on a bus to travel to Dublin to attend the Cycle Against Suicide Student Leaders’ Congress in the 3arena.

We started the morning early as the bus left the school grounds at 7:45am.

After a long journey, we arrived shortly before the congress began.
The Congress kicked off to an amazing start when the Booka Brass Band blasted some tunes from their new album 'Chilled Milk'.

It wasn’t all music, fun and games though, as there was plenty of talks to remind us why we were there in the first place, to make sure people know that “It’s okay not to feel okay, and it’s absolutely okay to ask for help”.
Sinead Kane a blind woman who has achieved the remarkable accomplishment of running seven marathons, one in every continent (you probably know her from the Allianz add), treated us to an inspiring speech about how she never gave up on her dreams of both her running and her pursuit of work as a solicitor.

She spent her days trying to convince teens who may feel or be different that they are all unique and that she herself is living proof that people with disabilities can still achieve their dreams.

Her message was inspired by her own life and experiences.

This made it so much more meaningful and it left a big impact on all of us TYs.

Kevin Hines is a man who threw himself off the Golden Gate bridge in an attempt to end his own life, just like many others have before and after him.

But Kevin was lucky; he was one of the only 26 people who survived the jump, and one of the only five who could walk again.
He now spends his days trying to convince people that suicide is never the answer.

We were lucky enough to have him speak at the congress about mental health and suicide.

His speech was one of the most powerful parts of the show and his own experience with suicidal feelings made everything he said seem very real.
His speech was one we would remember on the way home and maybe even for the rest of our lives.

He encouraged us to look after one another to ensure no one ever feels that the world will be better off without them again.
Another brave speaker with a beautiful singing voice was Kayleigh Cullinan.

She was brave enough to tell us about her own tragedies that shaped and defined her life.

When she was a teenager she was overweight and the other girls would bully her to the extent of which one day she was hit so hard she lost the sight in her right eye.

She told us the effects that all the negative comments and actions towards her had.

Kayleigh told us her method on dealing with her mental health issues was singing, a gift she discovered she had while being treated in hospital.

She advised us to follow our dreams, passions and hobbies before treating us to her amazing cover of 'Fight Song', originally sang by Rachel Platten.
James Kavanagh told us his experiences with bullying due to him being a proud member of the LGBTQIAP+ community.

He told us that standing up against a bully even by doing something small can have a huge effect on the victim’s life and shows them that they are not alone.

James told us that one day when he was in secondary school and his bully was passing around crude notes about him being really gay.
The note was passed to one student and that student refused pass on the note, he threw it in the bin.

This one act of kindness was enough to make James realise that his bully was in the wrong not him. And from that day on he no longer let the bully get to him.

This was an empowering message to any students in our year who might be gay and was a fun charismatic way to talk about such a serious subject.
There were plenty more powerful talks and groovy music played on the day and everything there was a joy.

Every student who travelled to the 3arena had a blast and it was surely one of the best trips we went on so far in our TY year.

We look forward to spreading the #itsoknottofeelok #togetherwecan #kindness message in the school later this term as part of WELLFEST 2018.