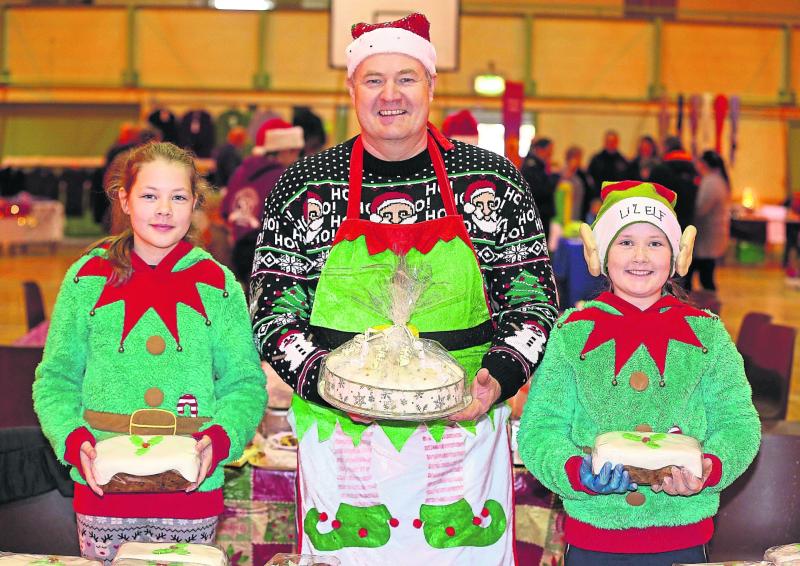 Christmas has been well and truly underway for a couple of weeks now in Newtownforbes.

The town had its annual pre-Christmas Craft and Artisan Fair on November 26, which saw the Christmas spirit come to life for the local community.
“It was very successful,” said Ann Devlin, one of the organisers of the event.

“ This is our third year running it and we raised money for two charities: Newtownforbes Tidy Towns and Newtownforbes & Kilglass Karate Club.”
The fair had more than 30 stalls featuring a variety of high quality gifts and goods. Best of all, it was all local.

“We had knitwear, crochet, woodwork, cookery, jams, flowers, angel readings, beauty products and aloe vera,” said Ann, listing off some of the products.

“We had a TY class from the school in Strokestown come out with their school product, which was hot chocolate. Another lad from Strokestown had his handmade cribs.

“We had a draw on the day for a lorry load of wood. Someone local did that themselves. The wood was all chopped up and ready for fires, so that was a lovely prize for someone,” she added.

“We had a charity raffle with a hamper donated by the organisers. That was won by a local person.”

Music on the day was provided by local man, Niall McGowan, who brought a lively, Christmassy atmosphere to the GAA Complex that housed the fair.

“There was great footfall and great support from the local community,” said Ann.

“We had Ann Marie from the local Garda Station. She had a stall set up with hi-vis jackets and she gave information about security and protecting your home during the Christmas season and people loved her.

“She was great and the kids loved her. She’s a very personable garda.”
Also on the scene were Kevin McDonagh and his two daughters, Charlotte and Siobhán, who were dressed and selling cakes for the day.
“You know it’s Christmas in Newtown when you see Kevin and his two girls dressed up,” Ann laughed.

With such a great turn out, it comes as no surprise that, once expenses were paid, the organisers could hand over €450 to each of the two charities that were supported on the day.

Best of all, there was a cheery atmosphere in the town as the local community banded together to support local businesses and local charities.

“We were really pleased. We had great backup from the organisers, from the families, from the GAA who gave us the hall,” said Ann.

“There was great community spirit and a great sense of camaraderie.
“There were people at it that you don’t see out too often, but because it was local, people supported it, which was great to see - especially in the run-up to Christmas.”

And, she said, with such a great fair this Christmas, there's no doubt it'll be back again next year.

“Based on this year’s success, it will definitely be local again next year.
“It was great to have the local people out because there are so many other things on and so many draws on people’s finances.

“People are very conscious of where they’re spending their money and we feel so honoured that they chose to spend it with us.”