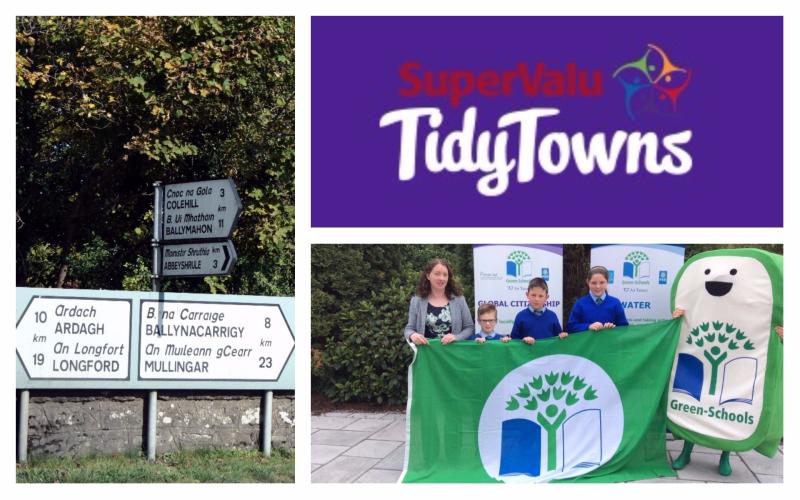 Here's what the SuperValu Tidy Towns 2017 adjudicators had to say about Colehill and above are the marks Colehill received.

Community Involvement & Planning / Rannpháirtíocht an Phobail & Pleanáil:
Colehill is welcome to the 2017 Supervalu Tidy Towns Competition.
Thank you for the very well completed entry form and May 2017 update on the work schedule first initiated last year. This was the adjudicator’s first visit to Colehill and it was a little hard to find initially on an evening that was making an effort to be part of our summer. Thank you for the excellent sketch map it made for easy identification of places of note in what is a rather small village.
It was hard to define the boundaries for adjudication but it worked out fine and as the old saying goes “where there is will there is a way”. You are a proactive committee of 6 and this can be gauged by the work schedule and also by the fact that most families are part of your tidy towns support.
No doubt you have been influenced by the success of your neighbours Abbeyshrule Tidy Towns Committee who incidentally mention Colehill NS as one of the two schools that are part of its tidy towns programme especially on the biodiversity element of its work!!! What happens if there is divided loyalty?
St Sinneachs is quite an unusual saint’s name and obviously very much associated with this part of County Longford. The methods of communication are varied mixing the tried and trusted with the new forms of social media. Good to note that the Solas programme is of benefit to the community as part of your tidy towns remit.
Well done on the fundraising efforts which help you supplement the shortfall in funding support from Solas. Thank you for your endorsement of the competition and what it means to the greater Colehill community in this your second year in the competition.
The work plan is simple straightforward and effective so well done on putting this together as it will give you greater focus in the years ahead.

Built Environment and Streetscape / An Timpeallacht Thógtha agus Sráid-dreacha:
Your change of plan from restoration of water pump to provision of bench at school was noted but it doesn’t seem to have been installed as of now. You certainly have got an in with Longford County Council who generously reallocated a tidy sum towards the original pump project.
The school was well presented on the day and the green flags flew proudly as a testament to what the school has achieved in the green schools programme to date. The distinctive thatched cottage across the road was whitewashed and was neat and tidy and while it may never be the same as it was some years back it is important that it is maintained in some format rather than letting it go into  total decay. Road surfaces were acceptable, one or two patches at the main cross roads were in need of resurfacing.
Stewarts PO is rather unusual as it seems just to be a private house tucked away from view. It is great to see that it has been retained in such a small village and the adjudicator wonders if it serves the nearest adjoining villages of Abbeyshrule and Taghshinny?
The Medical Centre was in acceptable condition and there were a number of individual residences and farmsteads  that were presented to a high standard.You have reacted positively to the suggestion in last year’s report that the village needed a focus and the work objectives that you have outlined will be of huge benefit in the years ahead. The adjudicator would be very supportive of the need for continuation of pedestrian access to the cross roads beyond the eircom exchange.

Landscaping and Open Spaces / Tírdhreachú agus Spásanna Oscailte:
Plenty of potential to do well in this category in the years ahead and it is important that you plan well when it comes to sustainable landscaping that is going to serve the village. One notices your approach in giving consideration to what planting will suit the village.There are plenty options available to you to place planters of annuals and perennials that will create a year round effect.
The surrounding area near the previously mentioned cottage could be a perfect focal point for a number of half barrel or nice rectangle planters filled with a combination of annuals and low lying shrubs such as euonymus.Similarly across the road from the school there is a green verge against a backdrop of an excellent post and rail fence that could be selected as a possible location for two or three permanent beds.
Also, with the permission of the owner of course, the fence could be used to hang a number of small containers of annuals for colour purposes.
As stated at the outset of this section there is plenty potential to be creative in terms of planting and landscaping. Nothing too elaborate but do bring a little vibrancy to the village by way of colour.

Wildlife, Habitats and Natural Amenities / Fiadhúlra, Gnáthóga agus Taitneamhachtaí Nádúrtha:
Well done to St Sinneachs National School on attaining green flag number 5 for biodiversity. This is some achievement for such a small school and no wonder the neighbouring Tidy Towns committee want to link in with this success!! Success breeds success it is said.
It is now opportune for you to build a strong relationship with the school and do as was suggested in last year’s report consult with the county wildlife officer to help you draw up a suitable wildlife plan that will help create an awareness of the various species of wildlife that inhabit your immediate area.
Build on the research and evaluation work that has been done by the school to date.

Sustainable Waste and Resource Management / Bainistiú Acmhainní agus Dramhaíola Inbhuanaithe:
This is category that has been revisited over the last few years to encompass and promote the need for the reduction of production of unnecessary waste at source.
Yes I know it sounds like a tongue twister but it is important to get that message to the forefront of a community’s thinking. With the options for landfill decreasing in this country rapidly it is imperative that communities have a greater awareness of the implications of too much waste production.
The Tidy Towns Unit produced an informative booklet on this category which was very helpful in identifying mini projects that contribute to the concept of minimal waste production. The following are a few websites that will be helpful as well www.localprevention.ie www.greenhomes.ie and www.sustainableprocessing.ie
It also important that you are aware of what is happening county and country wide so keep in touch with the county environmental officer for updates.

Tidiness and Litter Control / Slachtmhaireacht agus Rialú Bruscair:
In fairness the village was free of litter on the day in question and this is down to the message that you as a committee are sending out to the community. Anti litter vigilance is the key to making sure that litter is kept off your roads and side areas.
It is also important to be vigilant in relation to fly tipping which has escalated to near epidemic proportions in the country over the last few years. Be involved in the annual spring clean day that most communities build into their work programmes for tidy towns. It brings people together for a common purpose and it also helps to foster what you are promoting – a message of anti litter vigilance.
General tidiness was acceptable but there is room for improvement and the committee should be in a position to identify the few areas that need attention. Overall the standard was good.

Residential Streets & Housing Areas / Sráideanna Cónaithe & Ceantair Tithíochta:
Hazelwood Estate looked very well on the day in question and the landscaping work that has been undertaken was viewed and noted. The work overseen by the gentleman mentioned in your application has contributed immensely to the look of this  very attractive cluster of houses.
All residents of the estate have rowed in by presenting their premises to a high standard. It is good to note that this initiative will be applied to the rest of the village. Private residences and farm homesteads were in good condition. Overall the standard of presentation was very good and merits an increase in marks is merited.

Approach Roads, Streets & Lanes / Bóithre Isteach, Sráideanna & Lánaí:
Roads into the village were all presented in good fashion and the grass verges were cut in accordance with recommended guidelines. The improvements at the crossroads were noted and this will make visibility and access easier especially for first  time visitors like this adjudicator who was unfamiliar with the area.
You should consider linking with Longford County Council to have a look at the signposting and possible additional name signs for the village as this adjudicator was a little lost on approach. Maybe it’s just a reflection on the adjudicator’s sense of direction!

Concluding Remarks:
It was a pleasant first time visit to the small rural village of Colehill. The committee is very proactive in its approach to improving the standing of Colehill in the competition. The success of the neighbouring community in the competition must have influenced other nearby villages to put their best foot forward. You are wished well in the future.