Killoe and Mullinalaghta are the leading Connolly Cup contenders 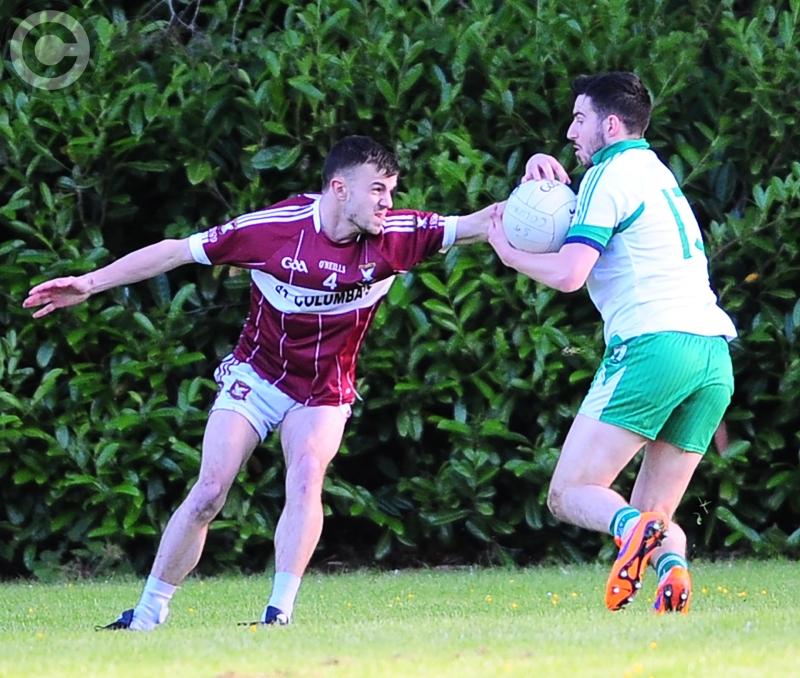 Mark Hughes on the ball for Killoe in his attempt to evade the challenge of Mullinalaghta defender James Mooney. Action from the Division 1 league game at the Laurels. Photo: Declan Gilmore

We’re at that time of the year when the Longford Senior Football Championship starts seriously.

The timing reminds one that the year is passing, just like the willy wagtails in the garden, industriously feeding their young, most of which have fled the nest but not straying far from their mother's side nonetheless.
It’s an educational experience, and quite riveting to watch the wagtail flitting to and fro, picking here, then maybe jumping a few steps and running towards another spot where something is found. One wonders how they gather such titbits, but as one comes closer – they become relatively tame – we can spot a huge bundle of food filling the tiny beak. So they do spot and gather copious amounts of feeding to help their young to grow.
The wagtail is extremely territorial; before the wagtails appeared the garden used to be almost black with starlings – by nature a dirty species! – but once the wagtail arrived that was the end of any intruders.
In no time at all, within the space of two days, the young have joined them in the garden with equal industry, though not perhaps as successful as the grown adult.
But learning fast.
At this stage in the birds growth it is possible to notice how much bigger the chicks are getting, day by day.
One day, after all, is a lot in a willy wagtails life.
An old friend of my fathers used say “the wagtail is hopping, who’ll win the championship”!
Having watched a number of teams jousting in the Senior Championship in the past week or so, and although it's hard to judge the real favourites, I'd be inclined to feel it's between Killoe and Mullinalaghta.
At half time in the Dromard game a true gentleman from north Longford came down to say hello, and we chatted for awhile. Always a most loyal man.
Both teams play an exciting attacking game, although both showed frailties in places. But it’s early days yet.
Mullinalaghta were without John Keegan on the evening I saw them, while Killoe were short Shane Dowd and Daniel Keogh (both injured) on the day they appeared.
Mullinalaghta were playing against Slashers while Killoe met Dromard.
Slashers weren't bad up front, some good forwards, but had no answer to Mullinalaghta's swift and accurate attack. The Slashers defence lacks cohesion. Too many guys trying to do silly things on the corner forwards.
Far better properly tackling the ball, intelligently.
Meanwhile they (the forwards) kept popping the ball over the bar.
Killoe looked very superior to Dromard although the game took on a one sided feel as it trundled on towards what seemed an inevitable finish.
It seemed that Killoe would win well.
However Dromard came within five points before the end.
Still if those games are an indication of things to come, it would seem that it's a toss up between Mullinalaghta and Killoe
I saw other games too, but none offered any sign of real Championship true grit and purpose.
Whereas both Killoe and Mullinalaghta were very direct and effective.
I’d see Killoe as favourites. Very impressive indeed.
However, Mullinalaghta know that this time might never come again for a long time, so they’ll be greatly energised for that reason alone.
Killoe look stronger, more fluid, and efficient – currently. They play with a certain flair and purpose, and have great individual players dotted throughout the side.
Yet Mullinalaghta are a very balanced team, playing with great abandon at times, yet hard to break down.
They boast a few stars too, and are not to be taken lightly.
It will be interesting to see how the two develop as the Championship unfolds.