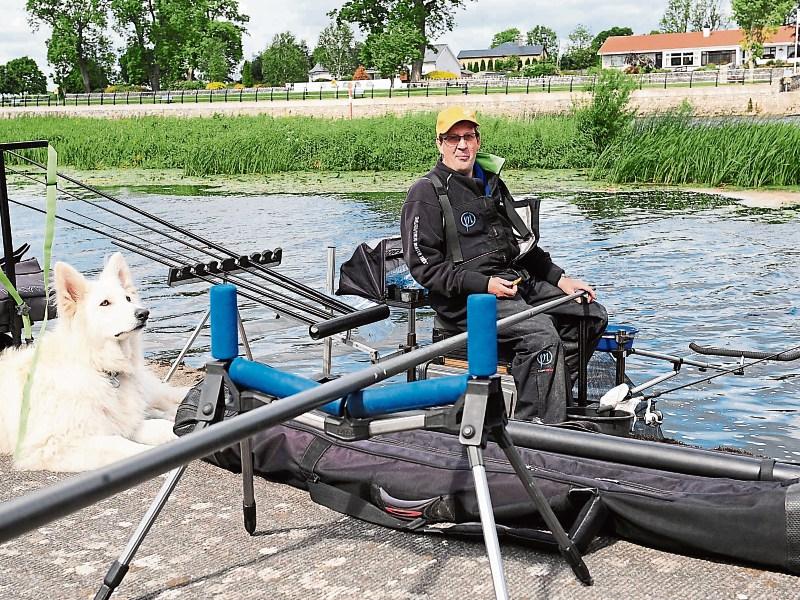 Roger Needham and his dog enjoying the angling in Lanesboro. Photo by Declan Gilmore

The waterways of Lanesboro and Ballyleague were full of excitement over the June Bank Holiday as anglers from all over Europe tried their hand at winning some of the €3,000 prize fund at the Lough Ree International Coarse Angling Competition.

The weekend was certainly a successful one for Tony Kersley from Enniskillen, who won the competition for the second time in three years after catching a staggering 32 kilos of fish.

For the third year in succession, the event was hosted by the Lough Ree Angling Hub and this year's sponsors included Longford and Roscommon county councils, Inland Fisheries Ireland and Bord na Móna.

The festival is a fantastic tourism opportunity for Longford, according to organisers and sponsors who were thrilled to have 42 anglers from all over the continent in attendance over the weekend.

“The competition was always seen as the shop window because you have fellas that come from the north of Ireland and Britain for coarse fishing over the years. Any time they get good catches, it appears in magazines over there and it helps to promote the area,” said John Devaney of Inland Fisheries Ireland.

“I’m working with Bord na Mona for the last 44 years, so I have quite an interest in the company which has played a major part in developing the ESB and developing Lanesboro,” he said, before adding that it was “great to see” the 42 fishermen lined up along the shore.

“The amount of benefit that is to Lanesboro and the surrounding areas in terms of tourism and bringing people back to the village of Lanesboro and Longford and Roscommon is  fantastic.”

At the opening of the festival on Friday June 2, the county council was praised for its part in ensuring the public toilets beside the lake were in full operation for the festival.

Work on the toilets was carried out by the Lanesboro tourism co-op CE scheme and opened up  to the anglers for the festival.

Independent TD for the  Roscommon-South Leitrim constituency Michael Fitzmaurice was on hand to officially launch the competition and spoke about the importance  of support from the local council to ensure events like these were  successful.

“A lot of work goes into organising an event like this. It’s a community that works together. But you also need support,” he said.

“It’s ferociously important to help rural areas like this. You need all departments working together.”

Next on the Lough Ree's agenda will be the Lough Ree International Pike Classic, organised by Camlin and Distric anglers. This will be two days of world class fishing on June 24 and 25.

For more informatio non this competition, contact Debbie on 043 33 21734 or loughreeanglinghub@gmail.com