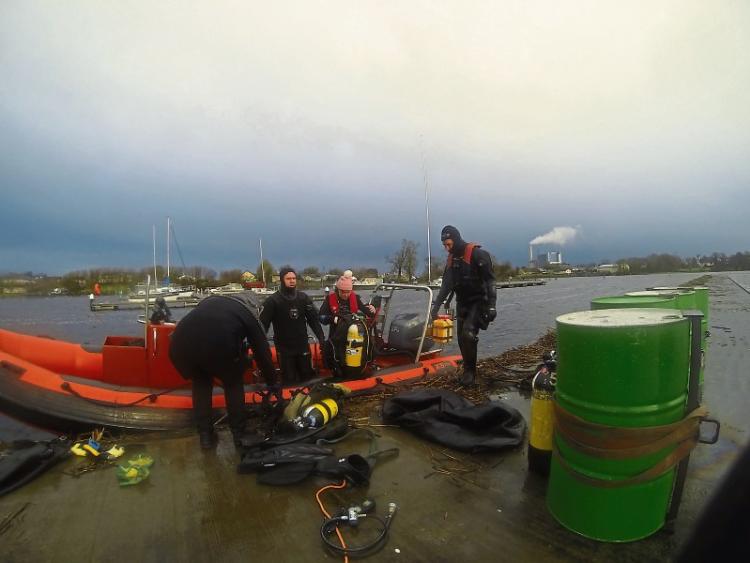 Storm Frank has well and truly left its mark on the country, with several counties devastated by severe flooding.

While Longford, with the exception of a few areas, has escaped the worst of the flooding, the effects of the wind has been felt, and on December 28 divers from Lough Ree Sub Aqua Club were called out when Storm Frank's strong winds blew a car into the Shannon at Lanesboro.

Once on the scene, the local divers helped to secure the car to ensure that it couldn't move and cause damage.

Speaking as they were on their way to assess the situation once again, Sean Doyle, PRO of Lough Ree Sub Aqua Club explained; “We were called within about 10 minutes of it going into the water,” adding that it had then floated approximately 200 metres across the Shannon. The boot of the car was open at the time.

Having already marked the position of the car by attaching a buoy, the focus then turned to removing the car from the water.

“You're looking at things like airbags and flotation devices,” Sean continued. “We have 200 litre drums and we fill them with air to try to make it neutrally buoyant in the water.”

On New Year's Eve, the car was recovered in a four-hour operation carried out by the club.

The car, a blue Skoda Octavia manual estate, was successfully refloated by the club's divers.

From there, it was towed by the Sub Aqua Club's rescue boat to the Ballyleague marina slipway and then towed out.