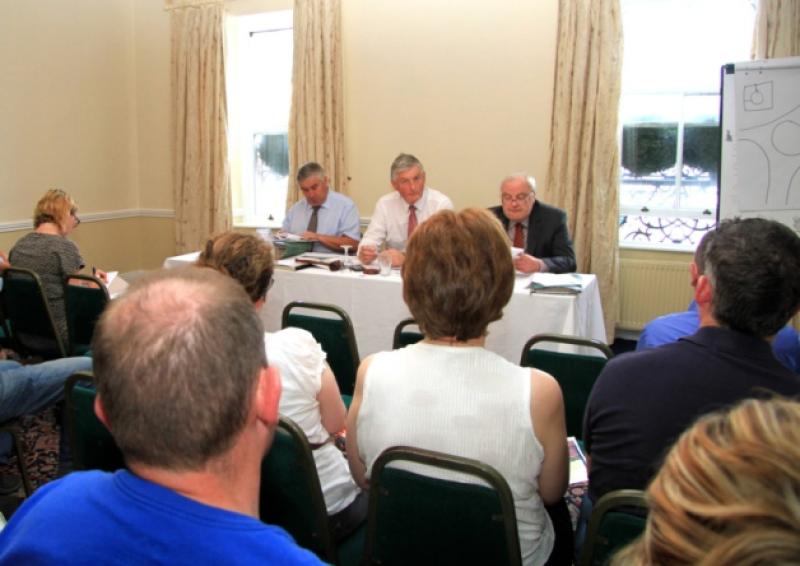 Two farms put up for sale at a public auction in Longford town last week changed hands for a combined total of almost €500,000.

Two farms put up for sale at a public auction in Longford town last week changed hands for a combined total of almost €500,000.

The biggest sale involved just over 40 acres of agricultural land at Killashee, Co Longford, which sold for €358,000.

A smaller, but equally impressive holding of nearly 30 acres at Clonart, Barnacoola, Co Longford, went for €121,000.

A third parcel of land, comprising over 32 acres, was withdrawn from the auction after attracting a highest bid of €110,000.

However, it is understood talks over its sale are at an advanced stage.

But it was the 40 acre farm land at Killashee which dominated proceedings inside The Longford Arms Hotel last Thursday.

A sizeable crowd, estimated at more than 60 people huddled together for the much anticipated auction at the behest of Sherry Fitzgerald McGill.

Addressing onlookers, auctioneer Fintan McGill said due to the quality of the land in question, he would be opening proceedings at €250,000.

That drew a light hearted response from the vendor’s solicitor, Brendan Muldowney.

“It’s that good you can enjoy a stroll as well and be back for egg and rashers before a hard day’s work,” he comically put it. A brief sprinkling of muffled laughter later and it was back down to business with interest in the Killashee land appearing to grow by every passing second.

When proceedings returned, the Longford town auctioneer declared the land was formally “on the market” and would be sold to the highest bidder.

Ultimately, that honour went the way of a neighbouring property owner for €358,000.

He requested to remain anonymous when approached by the Leader, leaving Mr McGill to reflect on what had just transpired.

“I was expecting it to cross the €330,000 (mark),” he said, as he turned his attentions to the level of interest shown in all three land holdings.

“It was one of the best attended auctions we have had in Longford for several years with over 60 people present.”