Shining a light on Kawasaki Disease 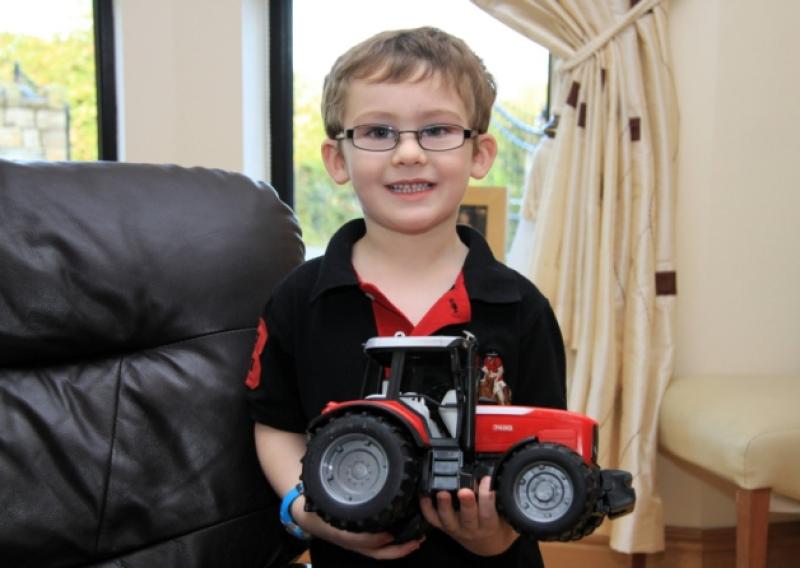 When five-year-old Niall Dalton from Mullinalaghta started school on September 1 this year, little did his parents - Mairead and Dermott - realise, that within the week their little son would be fighting for his life after contracting Kawasaki Disease.

When five-year-old Niall Dalton from Mullinalaghta started school on September 1 this year, little did his parents - Mairead and Dermott - realise, that within the week their little son would be fighting for his life after contracting Kawasaki Disease.

After just a couple of days in school Niall began complaining of headaches and stomach pains. “We thought at first that he maybe just didn’t want to go to school,” said Mairéad as she and Dermott sat in their kitchen and recalled the events of that traumatic two weeks back in September.

“On the Friday, Niall came home from school and when his sister Rebecka (2) turned on the lights, he screamed at her to turn them off because the light was hurting his eyes,” continued Mairéad.

“He was vomiting and had a temperature and I knew then that something was terribly wrong. Then a rash broke out.”

Kawasaki Disease often begins with a high and persistent fever that is not very responsive to normal treatment with paracetamol. It also presents with a set of oral manifestations including a bright red (strawberry) tongue; swollen, cracked lips and red palms of hands and soles of feet.

Mairead took him to the A&E at the Midland Regional Hospital, Mullingar where he was attended to immediately. After ruling out meningitis, Niall was treated for a viral infection and sent home with an antibiotic.

However, his condition deteriorated over the weekend and by Sunday he had red eyes, cracked lips and a strawberry tongue.

“His hands and feet were also red and I thought this was very strange so we took him back to Mullingar and they told us that they were 90% sure it was Kawasaki Disease,” added Mairéad. “They told us what the symptons were and Niall was showing signs of them all.”

Neither Mairéad or Dermot, nor their families had ever heard of Kawasaki Disease until that day.

Very little is known about it and it is very rare. It can however, attack children under the age of five and in the worst case scenario damages the heart.

At the Midlands Regional Hospital, Mullingar, Niall was treated with Immunoglobulin, but he did not respond and contracted a secondary infection which later turned out to be pneumonia. In and out of consciousness, he became seriously ill and was deteriorating rapidly. “We were extremely worried about Niall at this stage becasue he wasn’t getting better at all,” remarked Máiread. “He was so, so sick by now.”

Unresponsive to treatment, Niall was subsequently transferred to Our Lady’s Hospital, Crumlin where after necessary treatment there, he began to show signs of improvement.

A holy hour was held to pray for Niall in St Columba’s Church, Mullinalaghta and the following day Mass was said for him in Loch Gowna Church. It was touch and go in Crumlin, but once he began to respond to treatment there, he slowly improved.

“Niall was treated and cared for so well in Crumlin and in Mullingar,” said Mairéad.

“It was so great to see him improving. He went from not being able to move a limb to sitting up and chatting; the next day he was able to move his arms, then his legs and eventually he was able to walk again, but that took a little longer because his body was so sore after what had happened.”

Just shy of two weeks of illness, Niall returned home to Mullinalaghta and has been getting stronger and stronger with each passing day. Mairéad and Dermott are hopeful that he can return to junior infants at St Columba’s NS after the mid-term break.

“We are so thankful to everyone who supported and took care of Niall and the family,” continued Mairéad.

“We want to take the opportunity to thank everyone that helped out in any way; those who sent cards, had Masses said, gave us holy water, those who organised the holy hour and Mass, the doctors and nurses in Mullingar and Crumlin, our families and our wonderful neighbours and friends.

Niall is doing great and will be back in school soon.”

The table quiz will be held on Friday October 17 in the Piker’s Lodge, Loch Gowna at 8pm.

Tables of 4 - €10 each and there will be plenty of prizes up for grabs.

DJ Quarry will be spinning the discs on the night and everyone is invited to support this very worthy cause.