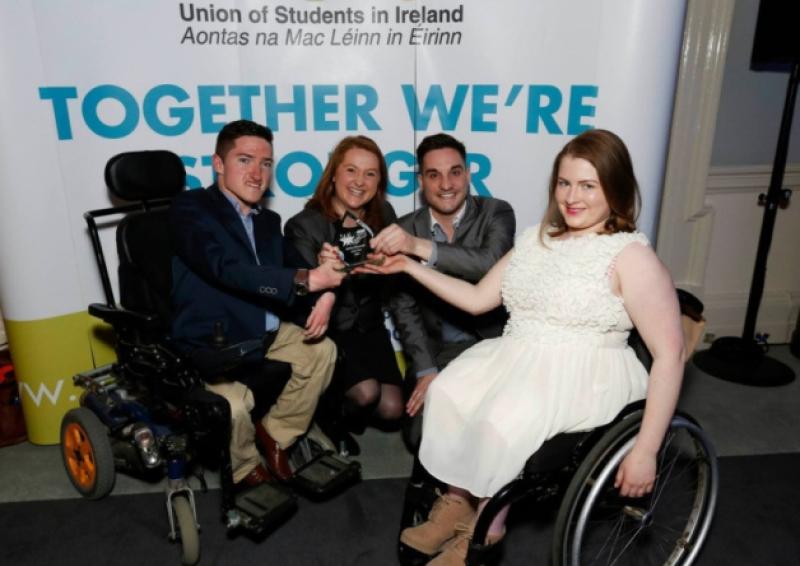 Among those awards was the prestigious ‘Best Welfare Campaign’, an accolade the college secured thanks to their (dis)ability Awareness Week, which was headed up by two Longford natives.

Entitled ‘No Labels No Limits’, the campaign was led by Carrickedmond’s Síona Cahill and James Cawley from Drumlish.

Speaking about the week-long event, Síona, who has recently been re-elected as Maynooth’s Vice-President for Welfare & Equality, stated, “It was an incredible week, and it is amazing to get this award, a recognition at a national level of our ongoing work here on campus.

“We celebrated and recognised students who everyday face challenges and overcome them,” Síona continued. “We wanted to create a campaign that focused on ability, not disability.”

Síona went on to explain that many young people feel isolated and alone because they feel different. “In our student campaign, we cast that aside, and our clear message was that not all heroes wear capes, in fact, most of them are the heroes sitting right next to you in the lecture hall or science lab.”

James, who is just finishing his postgrad at the Froebel department of education at Maynooth University, also worked hard to ensure the week’s success, and told the Leader about the reaction to the initiative.

“The week allowed Maynooth students to normalise disability, allowing students to experience an impairment - some of my class attended lectures in wheelchairs,” he explained. “The reaction to (dis)ability Awareness Week was unreal. So many staff members got behind it on campus, talked about it in lectures, and we had a huge presence on social media.”

Launched by MS Ireland Ambassador Aoife Kirwan, the week included wheelchair basketball from the Irish Wheelchair Association, Blind Football with the FAI, a ‘Hidden Disabilities’ Speak-out session, free sign language classes and an initiative where students dropped beads from different-labelled jars into a single jar, highlighting the theme that ‘labels are for jars, not for people’.

It was an extra-special night for Síona, as she also picked up the award for National Equality Activist of the year.

“I couldn’t believe it when they called out my name, one of my friends had to push me off my seat towards the podium,” she admitted, before continuing, “I have worked very hard on issues of student welfare and equality this year, in particular in relation to the upcoming referendum.

“My main work has been in registering over 3,000 students on campus to vote, and empowering them to get informed about the importance of voting and getting involved.

“I have also worked on a range of issues for Mature students, student parents, students with disabilities and those in financial need, and I will continue to work hard for them regardless of an award!”