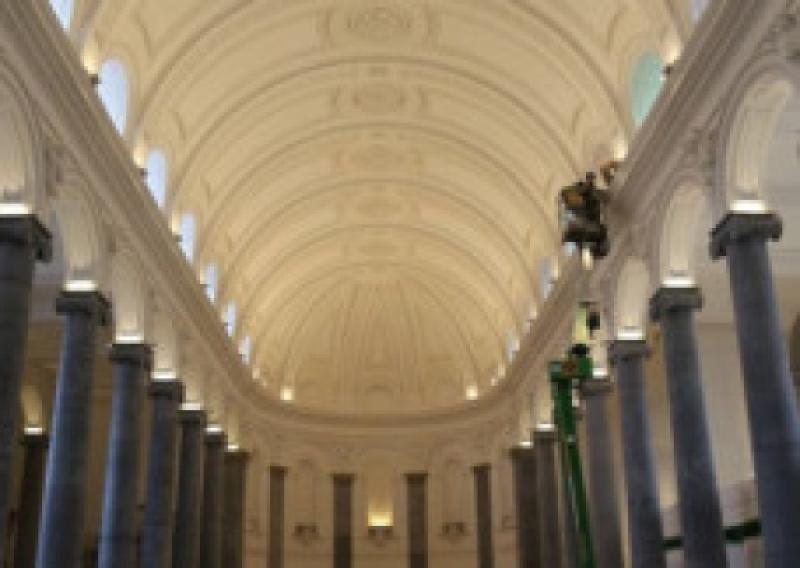 Many milestones have been met over the past few months - including the installation of the beautiful stations of the cross, the stained glass windows and the baptismal font and the arrival of the organ, designed by the world-renowned Piero Ruffatti, who has been at the Cathedral to help oversee the installation.

Completely manufactured at the Fratelli Ruffatti shop in Italy - even the metal for some of the pipes was poured at the shop - the shipment and installation of the organ is no mean feat, with 2,307 pipes alone to be transported.

Speaking about the design of the brand new organ, Piero explained, “The request from the architects was an organ designed in a contemporary style.

“I designed it in a way that I felt will look appropriate to the building, but still different to what you’d expect in a building like this.”

Thankfully, everything has arrived safely, and work to have the organ installed is already underway. According to Piero - who has designed organs for buildings all over the world - the organ for St Mel’s Cathedral is “a combination of traditional-style organ building with the best of modern technology”.

Once the Cathedral’s organ is installed and tuned, Piero will then turn his attention to another of his designs for a concert hall in China.

To allow for the organ to be put into place, a huge enclosure has been erected inside the Cathedral in order to eliminate as much dust as possible. Once the pieces are all in place, the organ will then have to be tuned.

Explaining the process, Project Manager Ronan Moore said that for the organ to be tuned, the Cathedral must be emptied and clear, and the seats must be installed. The seats, made by Dromod-based Irish Contract Seating, will be brought in at the beginning of November.

Every square inch of the Cathedral also has to be ‘quality checked’ before the tuning begins in mid November.

The Cathedral has come on in leaps and bounds over the past few months, with most of the major interior work completed.

“There has been a tremendous amount of overtime and night work to bring it to this level,” Ronan admitted.

“It’s a huge project. I’m completely exhausted but I’m as motivated as ever,” he continued.

“Everyone is giving 110% because everyone appreciates the importance of it. We simply cannot fail at this late stage.”

External works will continue this week, with paving to be placed across the front along with work on the road crossings on St Mel’s Road. Acknowledging the continued support of the local community, Ronan stated that a lot of work has gone into trying to reduce the impact that these exterior works will have on the community.

As work has continued, more and more of the outside progress has become visible to passers- by. For the internal works, the St Mel’s Cathedral Restoration page on Facebook and local man Tiernan Dolan have kept everyone updated.

“There seems to be an incredibly positive response on the Facebook page,” Ronan happily reported.

It is hoped that the Cathedral will be open in the week before Christmas, and after his time on the project, Ronan admitted that there will be mixed emotions once the project is completed.

Once again praising the whole team for their extremely hard work and dedication, Ronan revealed that he will be feeling both sadness and pride once the work is done.

“After two years of making so many friends and being involved with St Mel’s Cathedral, it will be tough, but I hope the pride will override the sadness!”

With planning and preparation for ceremonies in the Cathedral already well underway, Fr Tom Healy stated that there is “huge excitement in the community”.

“It’s great to be this far on, it’s very, very exciting,” he admitted. “We’re eight weeks from opening after five years of work.”

“I do think this will be a major moment in Longford history,” he added.

To keep up to date with the Cathedral’s progress in the run up to its reopening, visit www.longfordparish.com or search for St Mel’s Cathedral Restoration on Facebook.